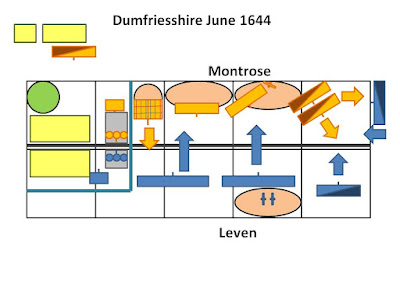 In this battle the Covenanters, as the attackers, had the chance to send up to a third of their forces on a flank march. This could be diced for on turn 2 needing a 4 to arrive (+1 as the Covenanters have a Superior Road Network effect from one of their territories) or automatically on turn 3. Victory is achieved when one side has lost 50% casualties.

Montrose deployed in a wide arc with the bulk of the infantry occupying the hills near his base-edge. He assumed that the Covenanter flank-march would come on the open left flank, and so placed the cavalry there. On his right he garrisoned the village with the Forlorn Hope and some Gordon Foot. The highlanders were placed in a deep formation near the village ready to attack the Covenanters left.


The Covenanters setup for a simple plan. On their right they positioned a regiment of horse with a second regiment flank marching. Their centre and left were occupied by infantry with one unit deployed to the left of the village in an attempt to flank it.


The battle opened with a flurry of maneuverer on each side's right flank. The Covenanter Horse moved forward and were soon joined by their flank marchers. Montrose occupied the village and sent a squadron of horse to flank the enemy troops opposite the village.


The first major action of the battle occurred when 3 regiments of Highlanders ploughed forwards and attacked the left-most Covenanter foot unit. Achieving a rare 2-1 in combat they were able to break the front unit and came close to capturing Leven himself. Bloodied but undaunted they surged forward and tried to attack the second rank. On this occasion though they could only manage a 1-1, and as we've found in a fight against steady foot the Highlanders eventually run out of steam and loose.

On Montrose' left flank a grand cavalry melee ensued. At first Montrose seemed to have the upper hand as the Covenanter Horse seemed reluctant to charge. Despite this they hung-on for most of the game and Montrose was unable to exploit his early advantage.

The decisive action occurred in the centre of the field as both sides Foot game to grips. In theory Montrose had a good position with a slight advantage in numbers, higher ground, and a good smattering of veterans. However if Wargames were about theory alone then we'd stop after the setup....

As the firefight began it became all too clear that someone had been peeing in Montrose powder. Despite their advantages Montrose' men were consistently out-shot and cracks began to appear in the line. Although doing ok on the flanks casualties mounted in the centre and it was Montrose who hit 50% routed first.

﻿ A tough battle for the Foot with casualties heavy on both sides, but the Covenanters superior shooting carried the day.  Once again the Highlanders proved erratic - good against shaken units but unable to match steady foot.

With Leven scoring his first victory its now 4 provinces to Montrose and 3 to the Covenanters. 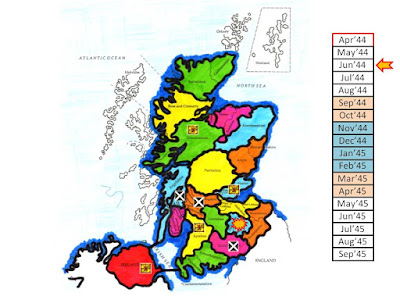