Last weekend I popped-over to Northleach for an all-day refight of Waterloo. Cirencester played the French with Flint's All Stars taking on the role of the Allies. I was cast as Napoleon and so was in charge  of the French attack.

The scoring scheme required the French to hit 12 VPs to win, with 4VPs for Hougamont, 2VPs for Le Haye Sainte / Papelotte and 4 VPs  lost of Placenoir falls. Additionally 1VP was scored for every unit north of the sunken road. 12 turns only were available. 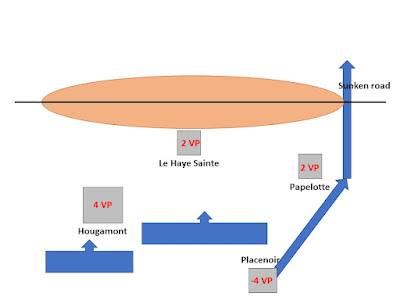 Some quick maths showed me that it would be hard to hit 12 VP through capturing the villages / farms so it was key to get lots of units north of the sunken road. I therefore decided on a quick attack across the line, with all the available cavalry heading for the weaker eastern flank. The Guard would be committed immediately up the centre in the hopes they could score VPs for crossing the road.

The assault against the centre and right proceeded quickly with only limited Allied resistance. By turn 3 both Le Haye Saint and Papelotte were in French hands and Hougamont was ready to be attacked. 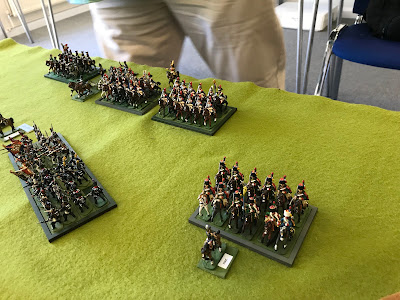 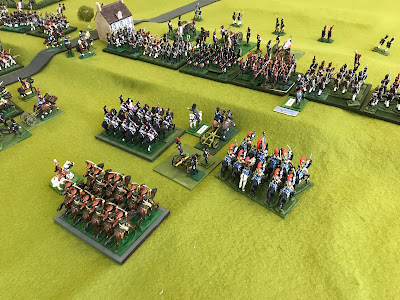 Sadly the attack against Hougamont did not go as planned, with the small garrison pushing back the attackers. This delay enabled the Allies to begin filtering troops into the back of the chateau complex. 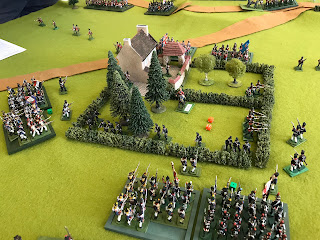 The main attack met with more success though, punching holes into the defenders behind the ridge and slowly forcing them to retreat to the west, and away from the Prussian arrival point. 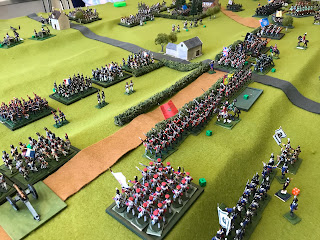 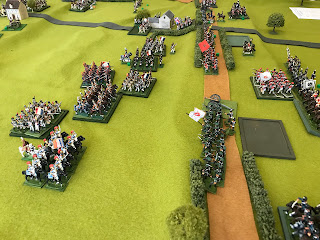 As history dictates the Prussians arrived with a few hours to go but in the refight they were too late the the French flooded across the sunken road. In the final turn the French lost both Le Hay Sainte and Papelotte but had 13 units north of the road, so won by a single point. 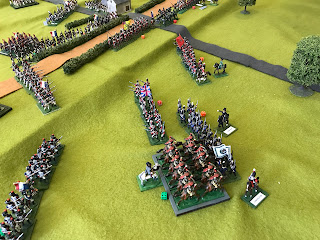 So a nice days gaming in the sunshine of Northleach, all played in a nice spirit. History was reversed but that's not unusual in Waterloo refights