Shadow of the Eagles - Battle of Sawmill Village

For this week's game we played one of the most gamed scenarios in history - I think its featured as a table-top teaser and in C S Grants book. Possibly in Charge! as well. Yes, its Sawmill village the classic encounter game.  In our version its French + Germans vs British + Prussians. I commanded the Prussians.

The French were first onto the field and opted to focus all their infantry either side of the road in tight columns. Cavalry formed the flanks on both sides with some skirmishers far out on the west side. The allies largely mirrored this with two tweaks - they placed both Lights in the western woods (one under the CinC's command) and left more space between the columns so they could easily form a firing line. The French pushed forward with the cavalry leading the way. The western horse heading into the centre to avoid the woods. The leading French Hussars on the east ran into some British Dragoons and were forced back in a worn state. 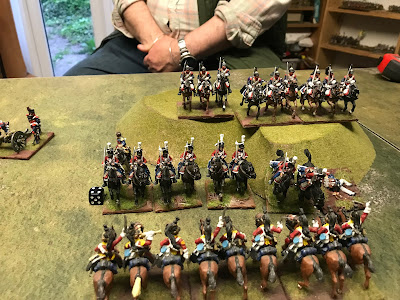 Both side infantry headed for the village, with the French first to occupy the buildings due to superior initiative. 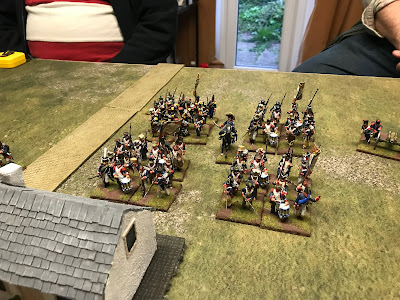 The cavalry clashes continued with the Prussians assisted by shooting from the woods and nearby guns giving them a clear advantage in the centre. In the east the heavies stood off before the  French were forced to charge as they were under fire from British guns. They were halted and pushed them back, leaving the Allies in control of the east flank. 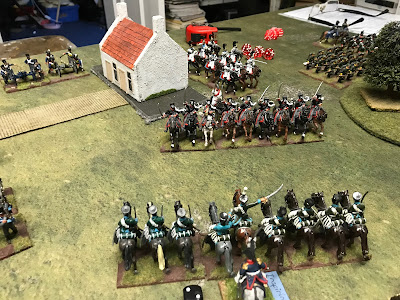 Centrally the Prussians charged into the village and were able to evict the Germans from the building they held and then pour fire into the supporting units. The Prussian heavies routed their opposite numbers, again aided by fire from the woods. 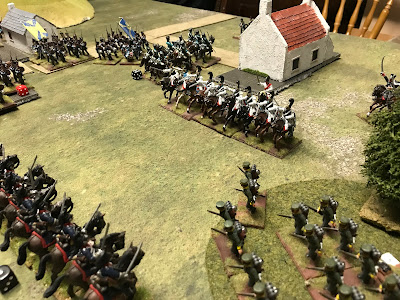 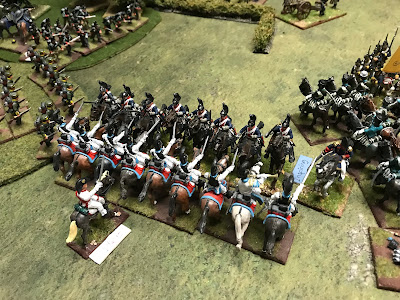 The British were able to flank the French position and fire into them from 2 sides whilst cavalry lurked in the rear preventing them from deploying the support they would have liked,

The game ended with the Allies in clear control of the village and French horse routed or destroyed.  The forces were pretty equal but the tactics varied on the night - the Allies placed more emphasis on shooting and so went into all the combats with a slight edge as the French casualties were higher, that plus some below par French rolls on a couple of turns secured the Village for the Allies. 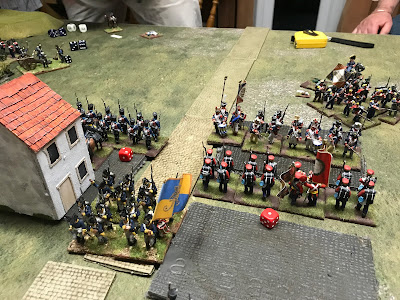