Shadow of the Eagles - bridgehead breakout

Another of my favourites from the C S Grant scenario book is the breakout following a successful river crossing. The book calls for pontoons but we went with stone bridges. 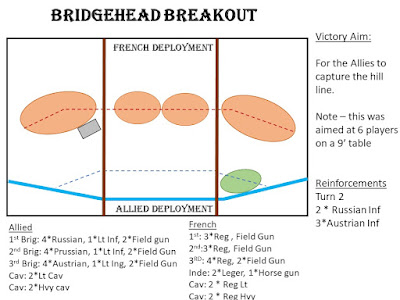 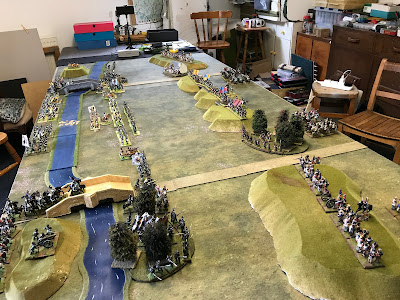 The defending French were fanned out across a low ridge that looked down on the river crossing, with their cavalry held behind the lines in reserve. Slightly forward of the lines a veteran unit held a small farm.

The Allies were arrayed east to west as Russian, Austrian, and Prussian. The central Austrians were the only ones with space to really expand out. Waiting across the rover were cavalry and infantry reserves. I took command of the Prussians on the Allied west flank.

In recent games both the players who controlled the French this week had been big advocates of attacking from defence to delay the enemy and stop an orderly attack forming. It was a surprise then to the Allies that the French opted to retreat behind the crest and leave only their guns showing.
This spurred the Allies on, who quickly unfurled their larger force and  pushed forward with their cavalry into the heart of the French defences, pinning them behind the ridge. 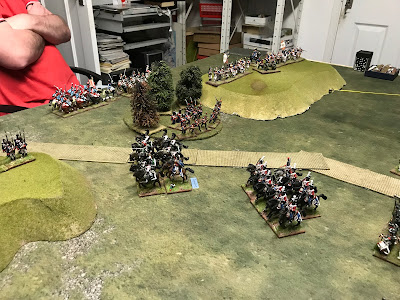 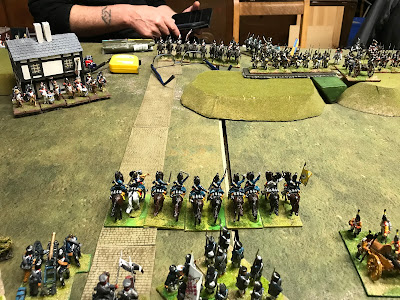 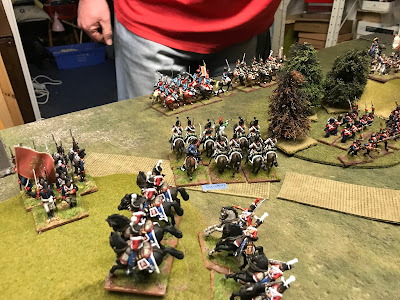 This allowed the Allies to position their infantry for attacks onto the ridge with no hinderance from the French beyond their artillery, who were soon silenced or attacked. The Russian cavalry managed to work their way through a gap in the French positions and found themselves in the enemy rear. 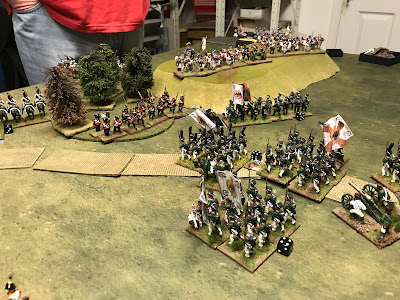 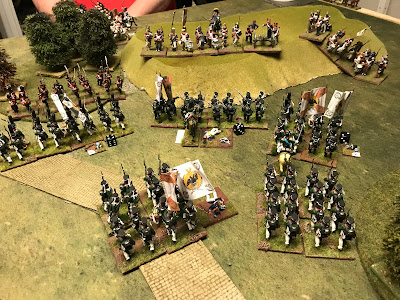 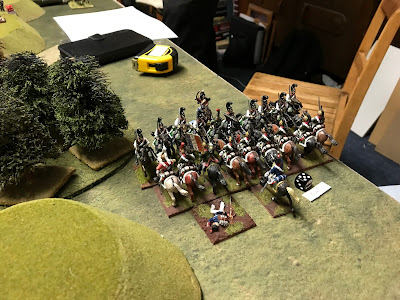 The French plan had been to hide from the Allies guns and then pop over the ridge to deliver volleys into the advancing Allies. They miscalculated though and found the Allies had occupied the ridge before they could oppose them, So it was the French who found themselves on the move whilst the Allies  could stand and fire.
The only place they had success was against the Russians in the East as the leading brigade was blown away, but they were soon replaced by the reinforcements crossing the river.

Within a couple of turns it was all over as the French  were out-shot by the Prussians / Austrians and charged by the Russians. The defences melted and by turn 5 the Allies controlled the ridge. The decisive factor was probably the decision not to try and interfere with the Allies as they looked to expand out from the crowed bridgehead.
Honourable mention goes to a unit of Italian Leger who managed to hold a wood against repeated Russian assaults. They stood firm while the line routed about them. 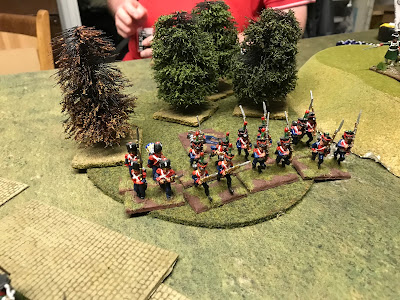