Shadow of the Eagles - blast from the past

For a break from the 1813/14 historical battles we've been doing recently we played a scenario from CS Grant's scenario book this week.  I picked Significant Terrain, which involved both sides trying to capture and hold a key road junction. Back to two tables this week, with me playing the Russians on table 2. 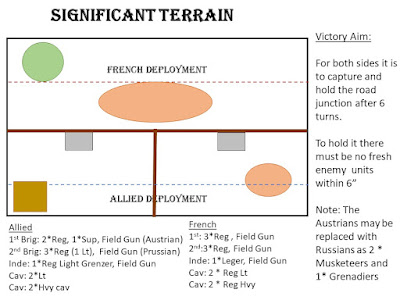 In this game the two sides had opposing plans; the Germans went for an infantry centre with horse on the flanks. The allies went with a centre of horse and the infantry attacking  up the flanks using the houses as cover. 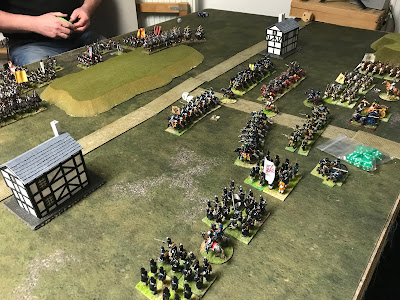 The early action was dictated by the Allies as their cavalry attacked straight up the middle to delay the Germans, while the infantry inclined to flood the area between the houses. 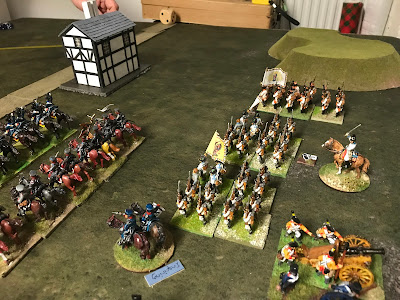 The first attack was pretty successful at pushing the Germans back and forced the German cavalry to swing into the centre to protect their foot. A ding-dong cavalry clash ensued that was destructive on both sides. 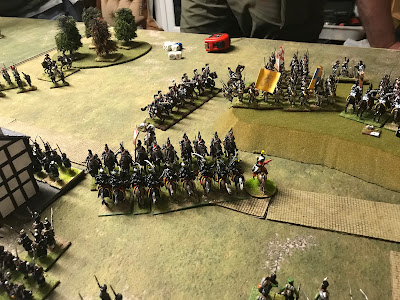 With both sides cavalry scattered, the infantry columns got stuck-in with a second phase of close quarters fighting around the road junction. 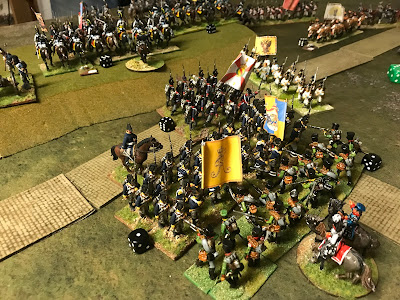 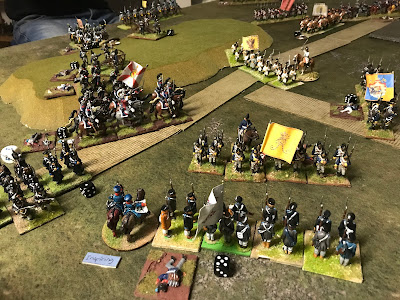 It was very much last-man-standing with the Austrians in control of the junction when the smoked cleared and no Germans able to mount a further attack.
So an Allied Victory -  in this case the clever use of the houses to funnel the action into the centre helped the Allies as it made it hard for the Germans to outflank them and so exploit their  wider deployment.

The French pushed forward in the centre with their horse and an infantry brigade plus the divisional reserves on the west side of the board. The Allies pushed the heavy horse up the middle backed by the Prussian foot, with the Light horse heading east. The Russians deployed 2 battalions against the French flanking force and used the rest to support the Prussians. 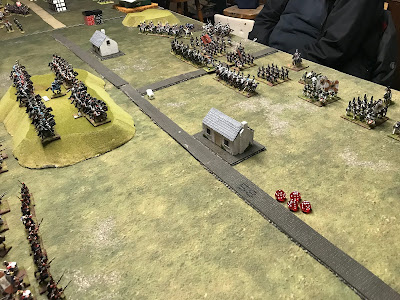 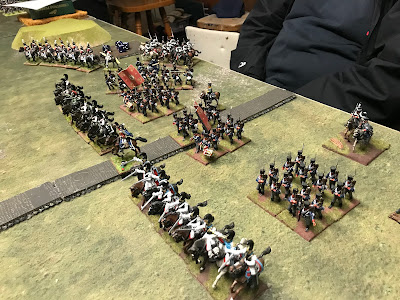 The French horse on the hill were in a no-lose position if charged  as even if they failed the counter-charge role they would be defending the hill and so negate the Allies charge. So initially the  Allies held off while they moved their infantry and guns into position to hold the road junction.
In the west the French made their initial attack but were slowed by accurate Russian artillery fire and so their advanced slowed to a crawl. Centrally the allies decided the time was right in turn 3 and so charged the heavies up the hill while the lights moved into a flanking position.
The Allied cuirassiers were able to rout the French dragoons holding the hill and push back the infantry following up.  This left the Prussians in control of the junction. 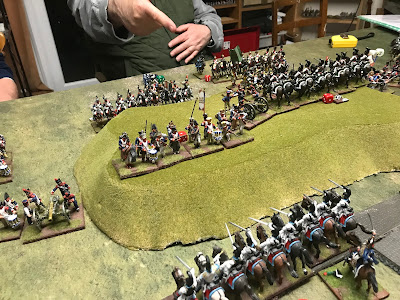 The only French threat was now  the flanking force moving up in the west and so to prevent them intervening the Russians launched a series of attacks to slow the advance. They  burst through the first line and forced the French to redeploy to face the threat, so ending the assault. 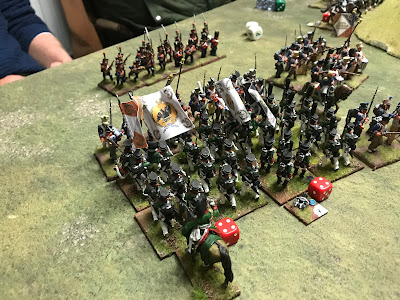 So another Allied Victory -  the basic Allied plan had worked pretty well here; pin the French cavalry in the centre for a couple of turns and then send some forces to the flanks in the hopes of distracting a greater number and deny them mass in the centre.