With both armies having secured the required supplies for the campaign they moved to the demonic portal bent on securing it. Arriving they found that the portal was damaged and so a race was on the find the missing pieces.

We played this as the Raze scenario. In this both sides place 3 objectives in the enemy half with a central tie-breaker. Points are scored for the objectives in the opposition, but you may block the enemy. The twist is that captured objectives are removed, allowing you to move on.

In this game both sides placed 2 on their left and 1 on their right. 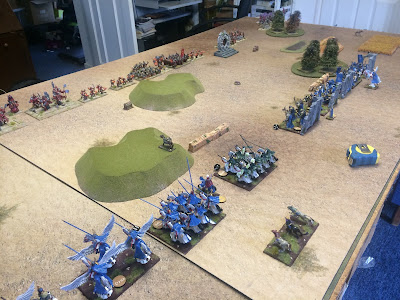 The Abyssals forces spread across the table to contest all the objective. the army was again heavy in shooting with Flamebearers, Efreets and a Fiend. The flanks were strong which left the centre a little more thinly held. 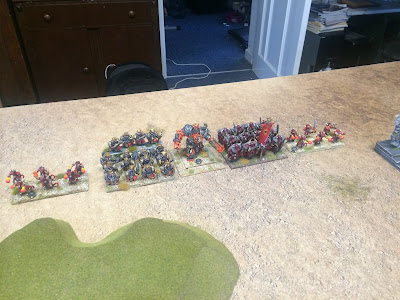 The Basileans focused their infantry in the centre. choosing not to contest the right-most of the Abyssal objectives. All of the cavalry and flying units were on the left facing the two objectives there. 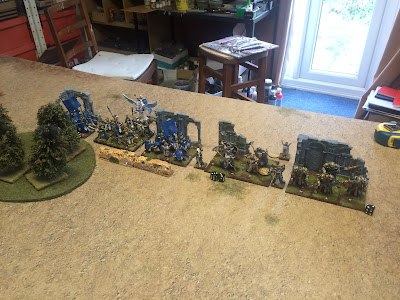 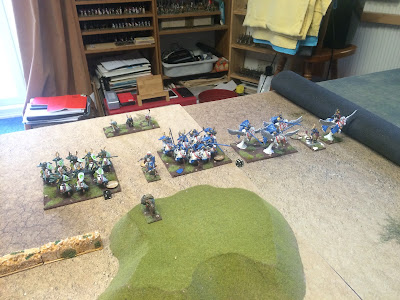 The Basileans advanced rapidly on their left. Heavy Abyssal shooting waivered the Knights but the flying units were able to flank the demonic forces and capture the objectives there. We traded snake-eyes with a unit of Basilean Knights being thwarted by a lowly Warlock but in turn not being routed when they were Devastated.


Centrally the infantry lines clashed. The Basileans had the advantage of numbers and were able to cut their way through the Abyssals Guards opposing them. 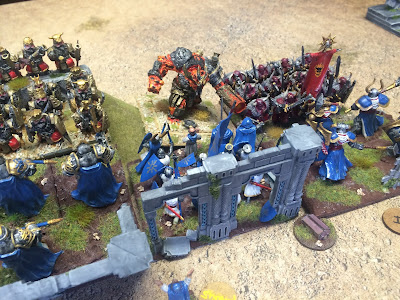 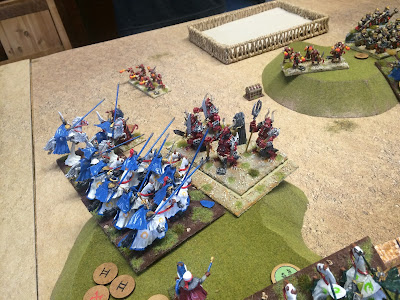 On the Abyssals left they had focused a significant a large and powerful attacking force. This quickly captured one objected but made slow progress against the Paladins deployed in the woods guarding a second. 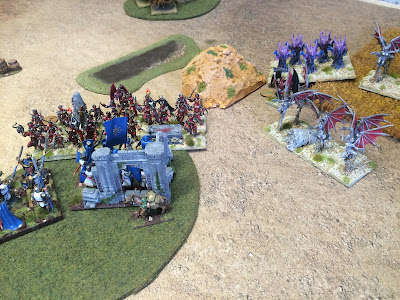 Eventually they were able to break through but this left them insufficient time to claim the central objective or the one on their right.  They also left an objective unguarded, enabling a Basilean flying hero to grab it in turn 5. 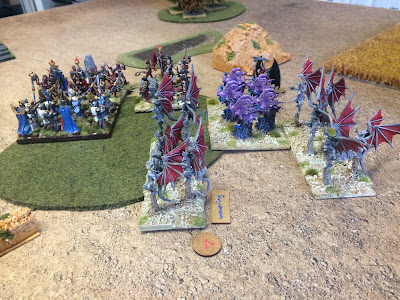 The final result was 4-2 Basilea. 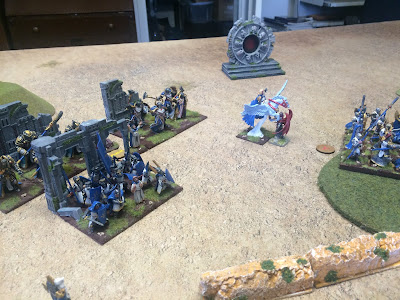 Once again the Abyssal shooting was a big factor in their plan, and even armoured units can easily find themselves waivered with 40 fireballs and 37 firebolts coming down range. Certainly the Knights ended the game taking shelter behind a hill.

This was my first try with the using a pair of War Wizards, something that features in lots of net-lists. They bring lightening bolt and banechant. I'm still undecided - they destroyed a Troop of Falmebearers and waivered some Gargoyles, so decent damage. They don't though contribute in scenario play as they have no Unit Strength and can nt really block the enemy.

Email ThisBlogThis!Share to TwitterShare to FacebookShare to Pinterest
Labels: Abyssal, Basilean, Forces of the Abyss, Kings of War