My next project 28mm Ottomans

I've been painting lots of Kings of War recently,  including some vaguely medieval humans who could feature in historical games. I'm putting that aside for a while though to work on a new renaissance project - Ottoman Turks. 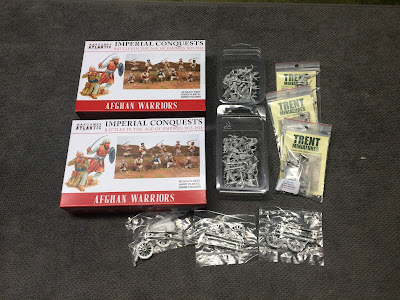 I've already bought some Warlord Games Janissaries but have just taken delivery of some stuff from NorthStar Games. In this package are Trent Miniatures acemi oğlans - trainee janissaries, three heavy guns and two boxes of Wargames Atlantic's Afghans. These are destined to be Azab infantry - the catch-all irregular troops forming the bulk of the infantry. With some old Dixons I'll recycle I think it gives me about 10 regiments of foot

I've included some shots of the Afghan sprues below. They are really aimed at NWF games but they will be fine for the 1600's as well.