With the release of Kings of War V3 I've been working on a new army and adding some finishing touches to another. It seems both will be fighting Undead in their next campaign outings.

First up are some units for the Basilean army - holy warriors somewhat modelled on Byzantium and the Crusades. I've been working on a few of the core units to get the backbone done.

Firstly Gur Panthers - fast chaff units able to delay the enemy and block the odd charge. They can also be fielded in Regiments as a reasonably hard-hitting flanker. Figures are Games Workshop Gryphounds. 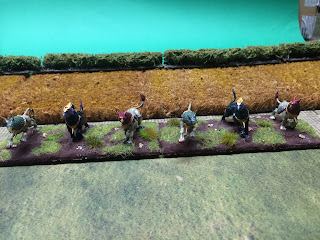 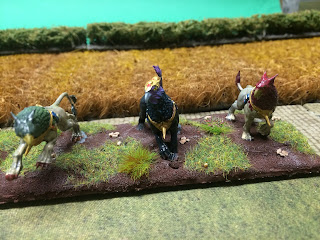 Next Ogre Palace Guards - these are hard hitting and resilient large infantry who look set to be very popular given the likely rise in spear-armed units due to improvements in the Phalanx rule making calavry and flying units less useful in frontal attacks. These are GW Stormcasts (with a head swap) I got for £5 at the Reading show Bring&Buy. I have the proper Mantic models too so this will be used if I field two Hordes. 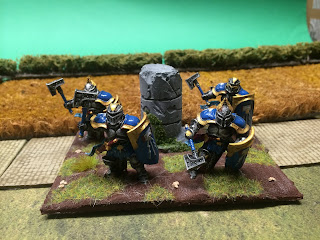 The Paladin Foot Guards will form the core of the army. With my Vanguard units I have enough for three Regiments, with two shown here. I've gone for a Crusader theme where I can so that these can be reused for historic games in future. The knights are Fireforge with Perry priests. 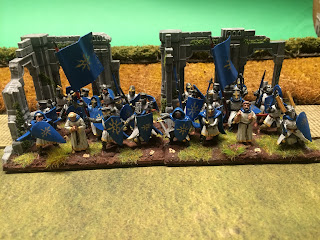 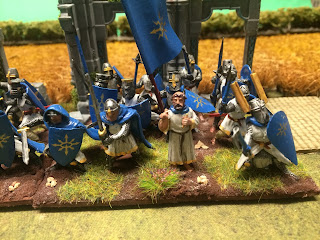 A major source of speed and mobility comes from the Paladin Knights available in either Regiment (shown here) or the double sized horde. Again they are crusader themed for reuse. If I used my other crusader units I could field 8 Regiments but that's not going to fare well with Phalanx and terrain. 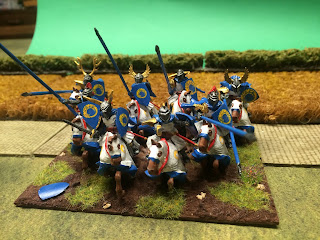 I've also done a few generic heroes mounted on warhorses.  The Basilean have a variety of fighty and support heroes so these can fill several roles. They may also be useful as mounted units in Vanguard. 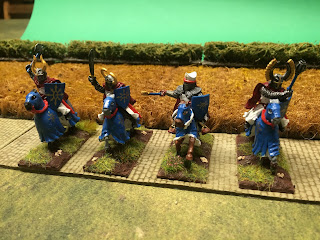 We also have a general mounted on lion. Gnaeus Sallustis is a tough combat hero who can fight, inspire, and heal. He's perfect for supporting Knights and grabbing objectives late game 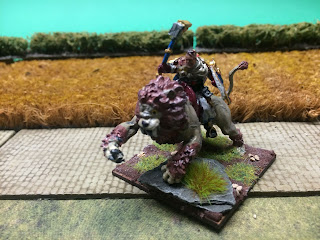 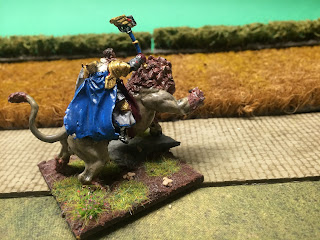 Finally some generic casters who can act as Priests or War Wizards. I'm mostly using them as Priests as the healing and inspiring make them great support to the infantry blocks. 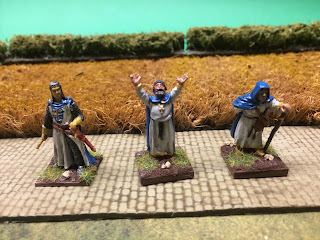 Over on the Red side I've completed a few more Abyssal units. The army was completed months ago but its always tempting to add a few more things.  First is a generic demon hero. He's slightly taller then the average Abyssal and probably works best as a flying Champion. 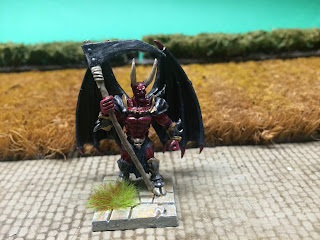 Secondly there is the Well of Souls - a major demon and at 300 points a big investment I've yet to try out. Its a flying combat monster that has the ability to take upto 20 damage on itself to heal friendly units. It can then try to regain those wounds through Life Leeching enemies in combat. So I guess its a big old heal battery that carry's a threat on the flanks. 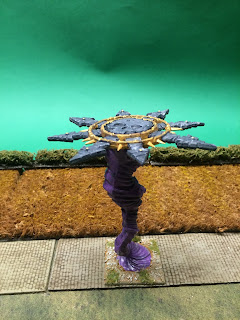 Finally we have Mau'ti-bu-su an upgraded version of the Temptress. Flying, steahly, inspiring, and dualist she's a specialist character hunter. She also has D3 Dread to lower enemy morale. 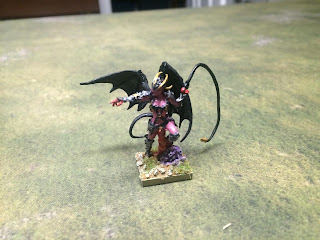 With Christmas fast approaching a some boxes of figures under the tree there will be more to come over the festive period.
Posted by Wargamer Stu at 08:40