The second clash of the campaign was a large affair (5 brigades a side) fought for the strategically vital crossroads at the centre of the map. Being such a large game we fought it over 2 weeks. The French fielded 2 cavalry and 3 infantry brigades against the Allies 4 infantry and 1 cavalry brigades.

There were three objectives to capture (hill, crossroads and farm), any two of which would give victory.

The allies deployed with cavalry on the right and a centre/left of infantry - the crossroads and farm looking like the main targets. The French mirrored the deployment, although their cavalry advantage made the hill and crossroads the main target. 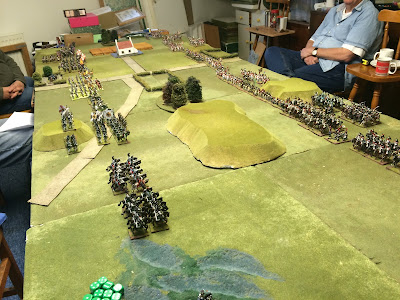 Both sides advanced on the wings attacking the hill and farm. The outnumbered allied cavalry fought well with some good dice, but weight of numbers began to beat them back after a few turns. A well-placed French horse artillery battery assisting the cause greatly. 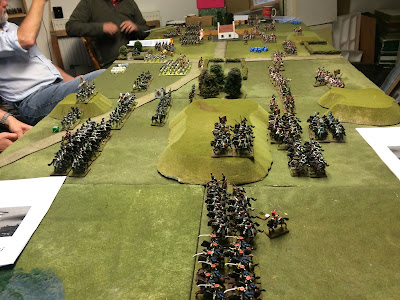 Around the farm the allies held the advantage. A series of initiative rolls in their favour allowed them to grab the farm and establish a good position. This flank became locked in a bitter firefight with neither side willing to risk combat. 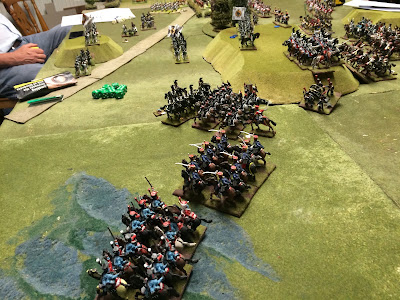 Centrally the allies suffered heavy losses from a massed French battery and so decided to launched an assault in column against the thinly held centre. This was beaten back by the waiting Swiss leaving the crossroads in a vulnerable position. 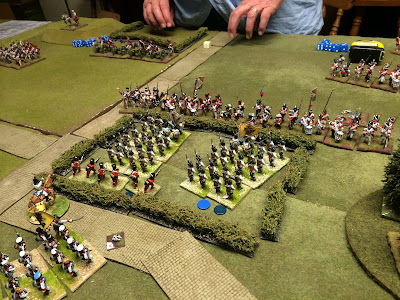 Back at the hill and by week 2 the allied cavalry was finally vanquished, leaving the Russian infantry at risk of being flanked. Forced into square they were hit with cannister then charged by a column. This classic manoeuvre cleared the hill and left it in French hands. 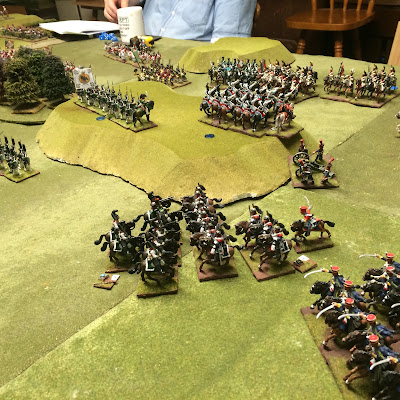 Meanwhile at the crossroads the allies rallied a few routing units and were able to contest the objective. Neither side had the strength to launch an attack so this would be a draw here. 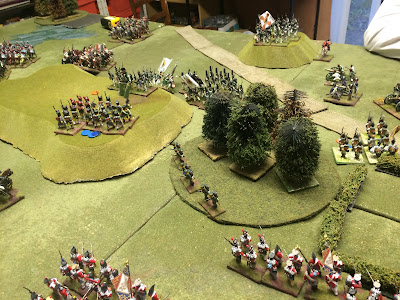 Finally the farm was still firmly in allied hands having withstood a couple of late French attacks.
So the battle ended 1-1 with the crossroads contested. As with the first battle the allies suffered the heaviest casualties, especially amongst their cavalry. 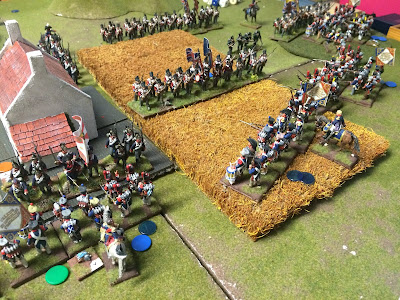