The Saracen faction offers an interesting mixture of units with a choice of being melee or shooting oriented. The core units are easy consisting of cavalry armed with melee weapons or with composite bows. These are available in either Hearth Guard or Warrior variants, and as usual the bow armed version have a lower defence value than the melee. Infantry is easy - your only choice are Levy bowmen!

So depending on the opponents / scenario you can flex your Warband to be shoot'y or harder hitting. It will however always be mostly mounted, and so may struggle in rough terrain or against massed archery.

These choices are also reflected in the Battle Board in the clustering of the abilities.
So nothing complex on the Battle Board and very few abilities playing off against each other. Brotherhood is the only one with any interactions and as it can be activated with any dice looks like something you should be using often. Coordination (+4 melee dice and +2 every time a Saga ability is used against you) looked powerful and would be something to use as often as possible needing Common + Common.


Knowing I would be facing Militias Christi I was expecting large numbers of elite Hearth Guard heavy knights with a few crossbowmen and foot sergeants in support. The scenario has not been determined in advance so I chose a balanced force offering both combat and shooting:
Composite bows give activation-free shooting, so guaranteeing plenty of archery and playing well with Brotherhood.

The scenario chosen involved both sides attempting to capture a holy relic being escorted across the table by neutral troops. So it would be a bit of a race. I lined up with most of my cavalry on my right, ready to cut-off the relic and a small blocking force on the left. 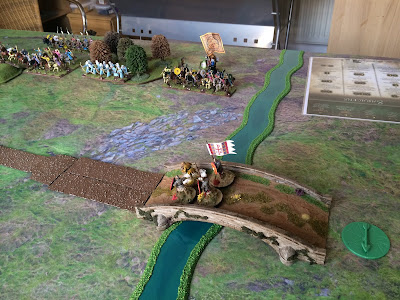 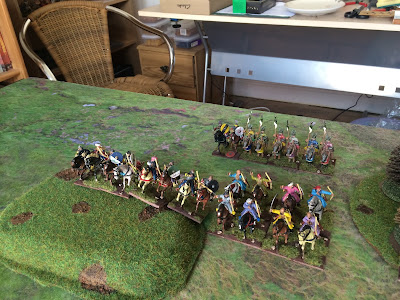 The Militias Christi (Order of Lazarus) did largely the opposite, with most of their troops heading straight for the relic and a unit of brother knights on their left. 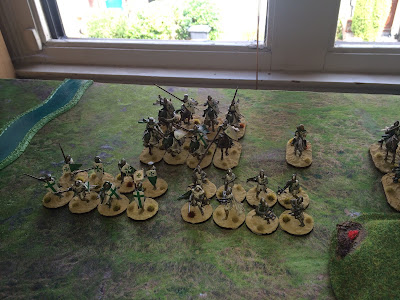 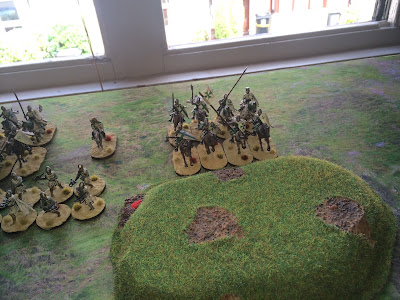 The game opened with both sides advancing towards the middle of the table. I pushed my bow-armed warriors quickly into the knights, hoping for a devastating volley.  I was however disappointed due to some poor dice and an annoying ability called Orison, which enables the knights to cancelled up to 3 hits a turn. With the archery failing the knights then barrelled down from their hill and mashed one unit of Saracen's. 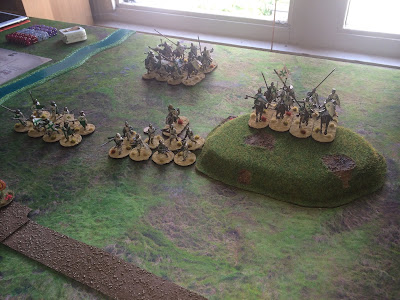 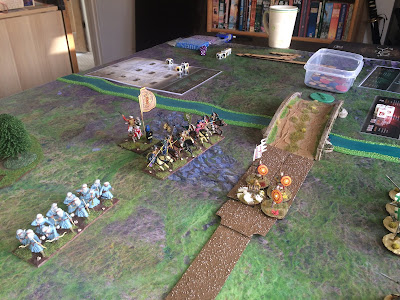 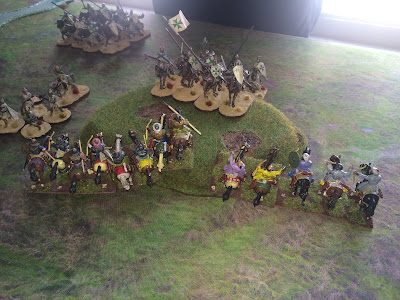 More in hope than expectation I unleashed a shot from the Levy archers. The knights gambled and chose not to use Orison, but this was a fatal error as 75% of the unit fell from their saddles. Just to rub salt into the wound I then captured the relic with my Ghulam's. 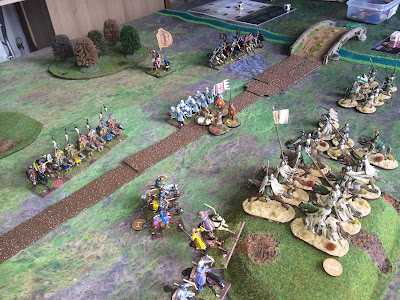 The Militias Christi then played their final card and charged the Ghulam's head-on with the last unit of knights. Despite loading up my defences I lost 75% casualties and was pushed back. 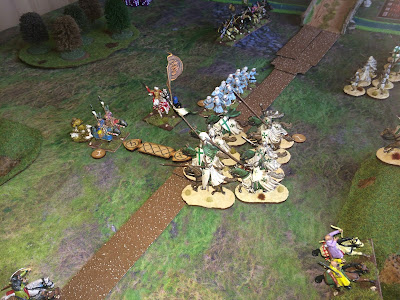 This gave me the breathing space needed though. I formed my own version of the England love-train  and placed a string of units between the knights and the relic. It was now clear that there was simply no way that the knights could fight their way through before the relic escaped, and so a Saracen victory was declared.


So a successful first outing but its hard to draw too many conclusions. The outstanding turn of shooting by the Levy blunted the knights attack and changed the game in the Saracen's favour very heavily. They seem a flexible faction with some solid melee abilities. The shooting abilities need you to get close, and they can nt really interfere too-much with the enemies plans. Coordination and Brotherhood were my go-to abilities in this game.