The final battle of 1862 was a classic encounter - the Confederates were required to hold two strategic hills while the Union tried to capture then. Both sides were fairly equal in size and composition, so perhaps a tough ask for the attacker.

Deploying first the Rebs balanced favoured the right-hand hill with a reserve ready to react to the enemies movements.


The Union plan was a simple one - mass the best troops against the least defended hill and hope to out flank it before it could be reinforced. A smaller force would try to keep the defender on the right-hand hill busy by giving them a shooting target.

The game opened with the Rebs pushing forward to occupy a central wood and seeking to reinforce the weak left. 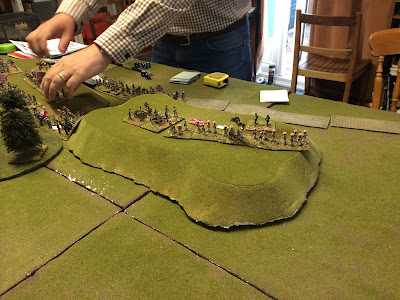 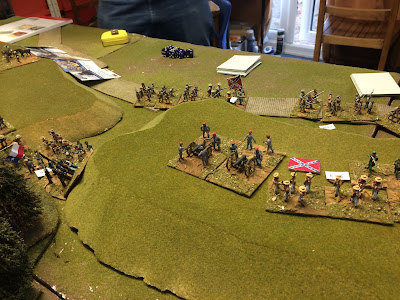 The Union pressed ahead with the planned attack and threw forward a small force of NY cavalry to try and slow-down the reinforcements, or at least create a problem for them. 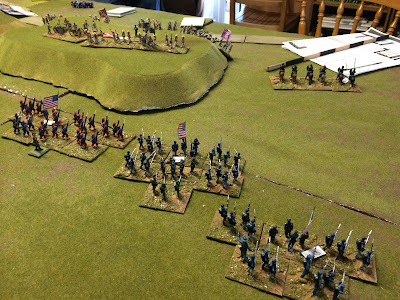 Now came the decisive action of the battle. The Union launched the freshly arrived NY Zouaves up the hill and routed the defending Texas infantry unit from the ridge. With the NY Calvary in support they looked likely to roll-up the line and win the day. 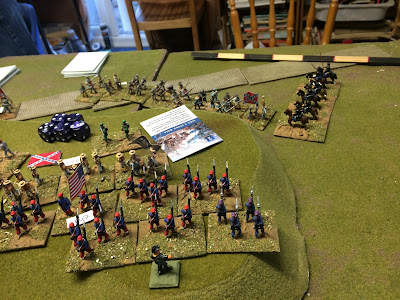 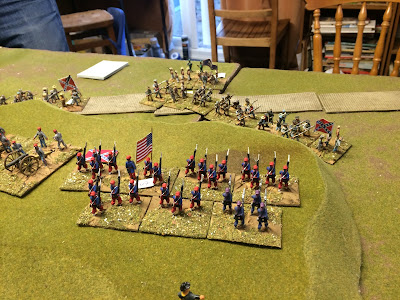 However this is where the card system bit back - with the Rebs in danger of being annihilated they played series of cards that froze the Zouaves in place and allowed the Rebs deploy a deadly looking cross-fire. I say deadly looking as the dice were unkind and this cunning Confederate plan was undone by some awful rolling that left the Zouaves largely unscathed. 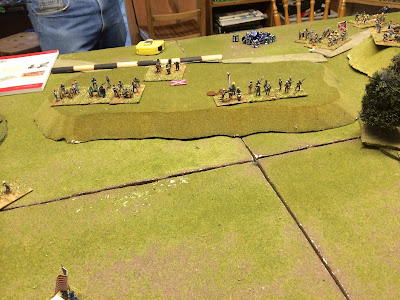 Not needing a second invitation the Zouaves surged off the hill and routed a second Texas regiment from the field before swinging left to threaten a third. 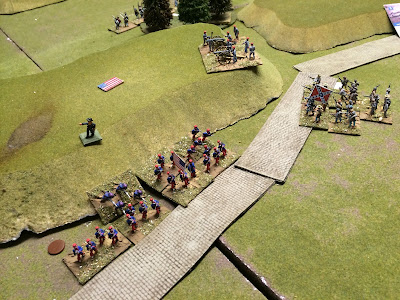 Confederate losses, combined with the captured victory marker, meant the Rebs passed their break-point, handing an unlikely win to the Union. Without doubt the stars were the NY Zouaves who loaded with advantageous cards more or less won the game on their own. Losses were heavy in the Union delaying force but they did their job!