The second battle back from the mid-campaign break saw us struggling for control of a strategically vital cross-roads in an attack vs defence game. This was the first battle of 1863.

A feature of Longstreet is that as units gain experience their shooting / defensive melee improves but their Elan / offensive melee declines.  Winning the scouting role, and having lots of Veteran or Cautious troops, I therefore decide to defend.

The Confederates opted to deploy their strongest units on their right, aiming to attack the side of the crossroads. Their centre featured a grand battery and their left was occupied by more infantry. A cavalry unit was thrown wide on the left to distract or exploit any openings.

Deploying first I had to go with a more balanced position. Strong units of infantry held the objective with artillery support. Infantry occupied woods on either flank of the crossroads. My far right was held by my cavalry and further artillery support.

As the attacker the Rebs made the first move opening-up with the grand battery and then pushing forward across the line. Fearing my centre could be blown-away I pulled back my central infantry into cover and so out of sight of the Rebs guns.

As the Rebs approached the main defensive line, both sides engaged in some lively fire. Good cards, good dice, and helpful cover meant this went the way of the Union with gaps appearing along the Confederate line. 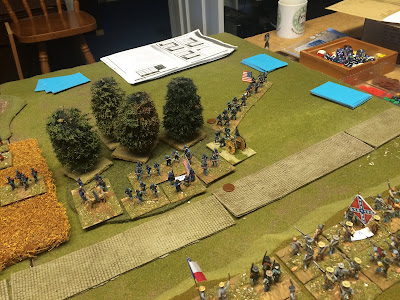 Rather than suffer in an uneven fight the Rebs gave a whoop and charged into combat on their right. This is where the command cards came into their own though - the Union having a card that halted one of the attackers in their tracks. The others charged-in but the fight was not now in their favour and they bounded back with more losses. 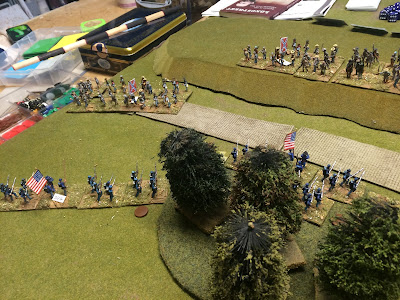 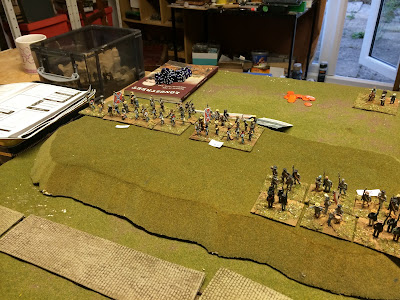 In the centre the Rebs also prepared to delver another assault to claim the crossroads. Dag nabit though if the same did nt happen with one of the attackers held-up and the other bouncing off out numbered. 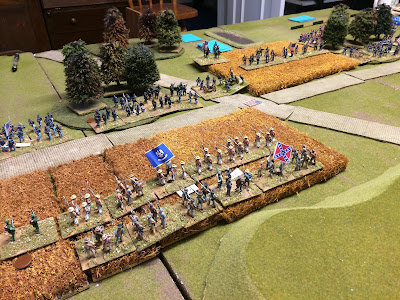 The Rebs rallied gamely for a further try but were subjected to murderous fire from the well entrenched Union defenders. With little hope of victory the Confederates collected their wounded and pulled back from the attack.


This was certainly a battle where the command cards favoured the Union. The Rebs had few cards that could disrupt the defenders and were forced to use lots of cards to mitigate shooting damage. The Union by contrast had just the right cards and right time to bugger-up the Rebs attacks.
Posted by Wargamer Stu at 11:57