The second battle of this round saw the Russians on the attack as they continued their offensive deep into German territory. The terrain was favourable to the defender with a bunker dominating the centre of the table and guarding the road junction. Fields, woods, and low hills completed the table.

﻿
The Russians planned for a battle of manoeuvre and so fielded all three of the tanks available to them as their reinforcements; a KV-1, a T34-85, and an SU-76. The Germans picked a Panzer IV and 2 * 75mm AT guns, one placed in the bunker.

The Russian plan was typically brutal as they chose to mass all their armour and about a third of their infantry on their own right flank, the aim being to hook around the bunker and breakthrough the German lines. On their left an infantry platoon sought to infiltrate through the woods whilst a small force held the centre to distract the Germans.

As the Russians pushed forward on the flanks the Germans responded by expanding their position to cover more of the flanks and try to stall the attack. On the Russian right they carefully manoeuvred their infantry and tanks ready for a full scale assault on the  Germans defences.


In the centre the small Russian force was successful in drawing off some of the German reserves, while the larger force of infantry made steady progress through the woods on the left.


The Russians then launched what was supposed to be their decisive attack on their right, with tanks leading the way. Although they were able to rapidly destroy the Panzer IV combined fire from the bunker, a second PaK43 and panzerschreckts was  enough to knock-out all three tanks in rapid succession. Not what the reds had planned!

Things looked dire on the Russian right but over on the left the steady progress made by the infantry put them within assault range of the German defenders flank and a successful charge cleared half of them from the fields. There then followed a series of assaults that left the Russians in charge of one of the victory points and several Germans units routed.


Unfortunately the same trick did not work on the Russians right and several assaults were stalled as the Germans on Overwatch were able to pin the attacker.

The Germans ran-out 6-3 winner but the game was rather closer than the victory scores imply and it was very nearly a successful assault.

Pleasingly there were lots of situations at the end where the Germans had to choose to either fire at the Russians in cover (risking a successful assault afterwards) or wait on Overwatch in the hopes they could catch the Russians in the open (but risk not firing if they stayed put).

Week 3 ended with the Russians further forward but neither side having successfully captured their objectives. So hostilities renew next time with both trying to secure the ground they attacked last time out. High command have been generous though and allocated both commanders some additional forces for their attacks. 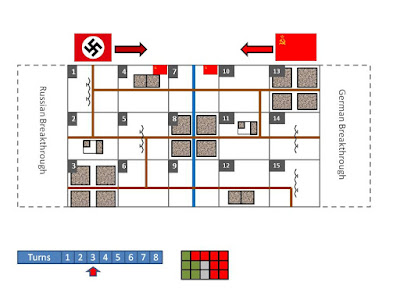