The first battle of turn 2 saw the Russians successfully expands their bridgehead and move towards the German baseline. In this second battle we see the Germans still trying to force their way across the river and begin their drive to victory.

For this scenario we made two tweaks to favour the attacker. Firstly we assumed the sun had come out and so the river was largely dried-up, so counting as rough ground. Secondly we allowed the attacker some pre-programmed artillery. They got 3 medium artillery strikes, which must be aimed at Jump-Off points, be within the first 3 turns, and be predetermined. The battlefield itself was heavily wooded, offering ample cover to both sides.


The German's preprogrammed artillery was targeted at the ford on their right and the bridge in the centre, arriving in turns 1 and 2. The Russians chose to ignore it and deployed early, which proved a good decision as the artillery strikes did little damage due to some poor dice.


The Germans chose to deploy their forces across the front of the Russian positions with infantry squads spread thinly across the board.  On the German right they deployed their Panzer, hoping to work it through the woods on that flank.﻿

With most of the Germans deployed the game settled into a exchange of fire at fairly long-range which was causing limited damage to both sides.  The Russians deployed their 2 * AT guns in a position where it could cover the dried-up river at a point where the Panzer would need to cross.


At this point the Germans felt they were bogged-down and so rolled the dice by advancing the Panzer to break the deadlock. As it dashed across the river it shrugged-off several rounds of AT fire before engaging the gunners. Poor rolling by the Germans and good rolls from the Russians eventually told and the Panzer brewed-up mid-river.


At this point the German attack began to stall so it was agreed that the game was a draw, which means the Germans must attack again to break through.

We concluded that the pregame bombardment was a useful addition but needs to be more powerful. So for the next round of games we will use 6 strikes from heavy artillery instead. 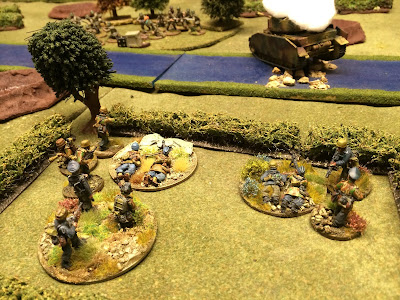