Today we tried-out our first game of Lion Rampant. We've decided to do a campaign based around the Crusades so we picked Arabs vs Teutonic Knights for our first game.

The Arabs
A larger and well balanced force

We opted for the Bloodbath scenario - line um up and go for it. The activation system means not everyone moves each turn but both sides tried to lurch forward into combat.


One the left flank the Knights found themselves surrounded by 3 Arab horse. Although eventually destroyed they managed to reduce the Arabs to half strength. In the right the Knights were lured into charging Arab spears - they bounced off, several times, before being beaten. It looked bleak for the Teutonic's but their foot proved tough and the Arab horse was reluctant to charge them. 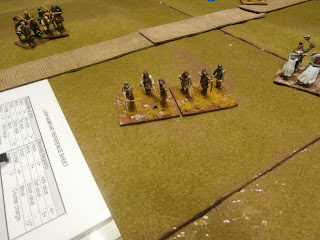 The rules were quick and easy to learn with very few factors to absorb. All the subtlety is in the activator charts and special abilities. We've clearly a bit to learn on that score.

Archers are powerful but do die rapidly if contacted, Spearmen are stubborn and pretty cavalry proof, and knights are tough but can become isolated.

The main point of debate was the lack of flanks or rears for units. For those of us used to more linear games it was a little odd and means manoeuvring for tactical advantage is really about who fights who. We will try out other scenarios though as it may be less apparent there.