Saga in the age of Hannibal - Claiming Territory

After the successful Roman raid both sides set about establishing the front-line between their forces. In this scenario you have to try and hold several strategic points in greater strength than the enemy to claim conquest points.

The Gauls were joined this week by Getafix (Nigel) boosting their forces to 12 points with his Gaesatae. Cacofanix and  Panoramix held back  defence while  Getafix looked to attack.

The Romans were also expanded with Phonious Balonis holding the centre / left while Spurious attacked with his Spanish against Cacofanix. It was also the first outing the Cretan Archers. 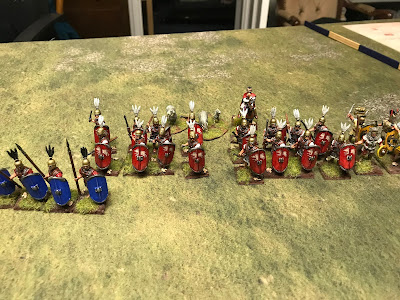 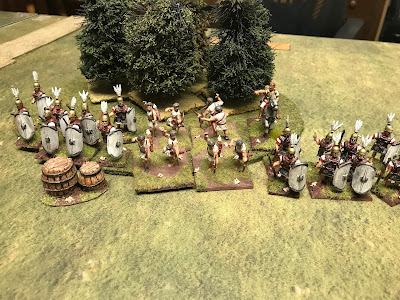 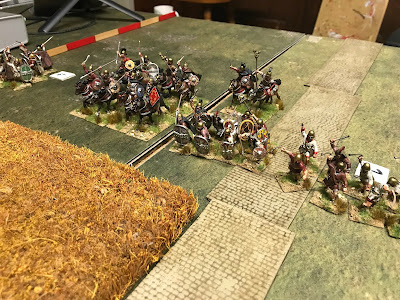 The Celts attacked straight up the middle with the Gaesatae supported by some noble cavalry, heading straight into the Roman centre. Some deadly shooting and the intervention of the Triarii was successful in blunting the attack and pushing them back with heavy losses. 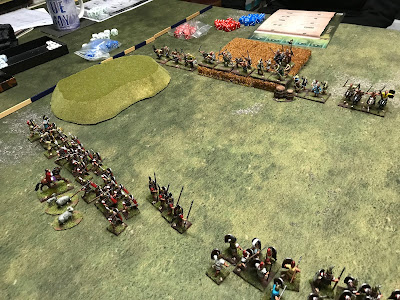 The Spanish were unable to exploit this success though with their medium cavalry again proving unable to really damage the Celts. Phonious did launch a probe of his own but was pushed back by Panoramix who was able to wipe-out a cohort of hastati in a fierce charge.

A draw looked certain when the sole surviving Gallic noble cavalryman was able sneak across the board (moving last) and steal a point to make it measly 73-72 conquest points to the Gauls.