This week we played the other part of turn 1 - the Desert Columns first battle at Korti. The Mahdists selected the "Objectives" battle meaning the British had to assault the enemy emplaced on a hill. The British formed-up to attack the centre and left of the defences.

Initially the assault made only slow progress as the Mahdists attacked and looked like they might be overrun. However a brave young ensign intervened and killed the Dervish commander of the central command, at a stroke causing half the army to run. Form there it was a victory for the British. 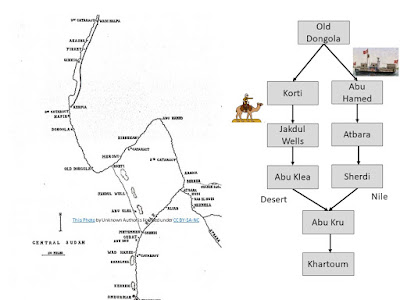 1. Wadi: these count  as prepared positions when shot at. You may fire over them as they are below ground level.

2. Cavalry may dismount as infantry one class lower. This may only occur once per game and they may not remount.

3. Formation changes are ignored, elements must move as singles

4. A square may move a single square if an officer is part of it. It cost all his PIPs

6. You may not fire through cover at units behind. All units in cover are visible.

7. You may fire over head to/from hills but there must be a 1 square gap for intervening units.

8. Elements on the corner of a square do not count as flanked in combat and do not recoil if beaten. They are not destroyed by this.

o   Defending a hilltop in melee = +1 (not cumulative with trenches

12. Roll as many dice as you have commanders and distribute as you like

13. If a commander dies then through a specific dice for their final turn, if applicable