Having finally completed my KOW Lizardmen (Salamanders / Trident Realm) I got a chance to try them out this weekend against my brothers Herd. Its an interesting matchup; the Herd are quick and hard hitting but fragile, whilst the Lizardmen are slow but tough. 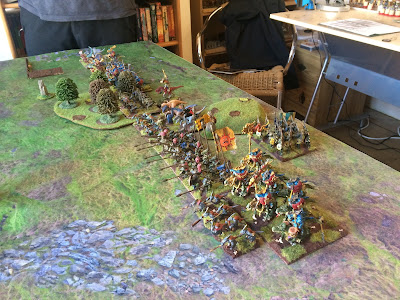 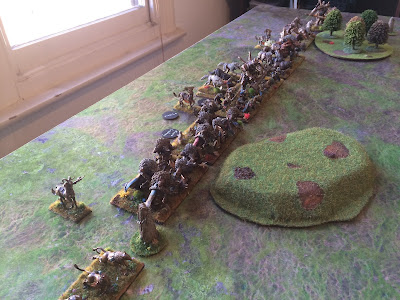 Knowing I'd likely be charged first I went for a core of infantry tough Hordes (Primes, Tyrants, and Placoderms) supported some flyers (Skylord and Skyraiders) and mounted (Ancients and Lancers). This mix meant I could also look at all my different options.

The Herd went for lots of fast and high attack  units - Spirit Walkers, Brutox, Stampede and Werewolves. A few monsters and flyers rounded-off the army. 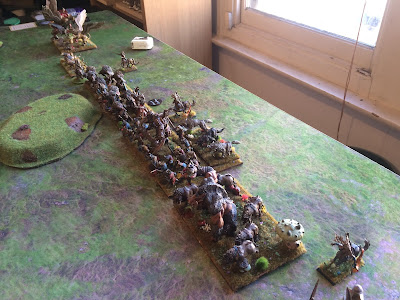 Winning the initiative I pushed forward slowly to preserve my front-line and allow my Chaff units to do their job of shielding the heavy hitting units. As the Herd are so quick caution is needed not to expose a flank to a sneaky charge. 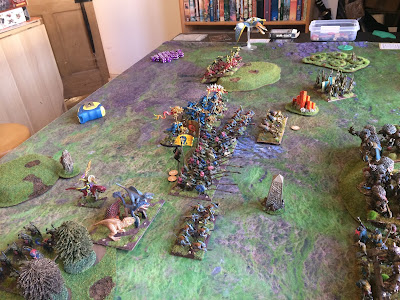 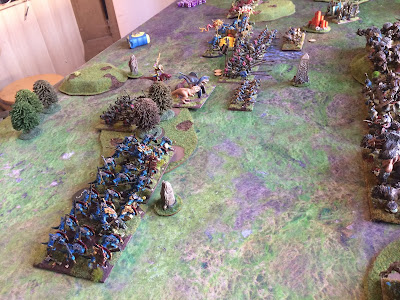 As expected the Herd quickly got in range and charged straight into my force across the line. Three nasty units crashed into the Primes Horde holding my right flank. The casualties were high by an unlucky "snake eyes" meant they held rather than crumbling. This was crucial as in the next turn I was able to flank the attack and destroy all three units - a battle turning event.

On the other flank my phalanx was routed but this bought precious time for Ancients and Tyrants to chew through the Herd's centre and open up the board. 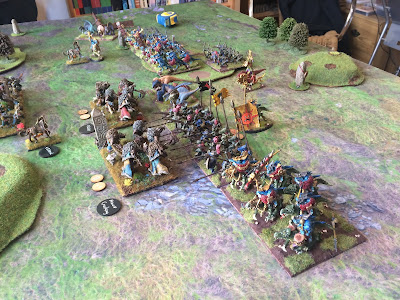 On the left both sets of flyers faced-off against each other. For most of the game neither was prepared to make the first move and risk being charged. In the end I sacrificed my lancers to draw out the Chimera and tie-up the flank.


We declared win for the Lizardmen as the Herd was shattered by this point. A somewhat lucky win though as the right flank likely should have collapsed when the Primes found themselves  facing off three units.

The unit-of-the-day was the Tyrant Hordes - although slow they are hard hitting and munched through quite a few units. The archers also did well (Naiad Heartseekers), chipping away the enemy and mounting a flank charge.