This week we fought  a second practice game as we had a few inexperienced players - one returning from a recent holiday to Sri Lanka and another after an 8-year absence in Japan. So a district Eastern flavour to the conversations.

This weeks setup was a simple affair as predicted there might be more than the usual amount of gossiping. An out numbered French force was holding a defensive position along a ridge with its right flank anchored on an rural church. A Prussian force was attempting to evict them from their position. Is was also the first outing for my Prussians after a couple of years of on-off painting.

On the French left both sides had deployed a brigade of cavalry, evenly matched in weight and quality. The Prussians took the initiative with a swift advance across the field but the French met the challenge about half way. The French cuirassier beat their Prussian opponents and chased to the edge of the table. The Prussian Hussars in turn beat their opponents but suffered less damage and so were able to remain a viable force

In a bold move the Prussian Hussars charged the pursuing French cuirassier in the rear - that attack was from long distance though which gave the French time to turn and respond. Shockingly though the larger Hussar unit was able to defeat the French heavies and so leave the Prussians in control of the flank. 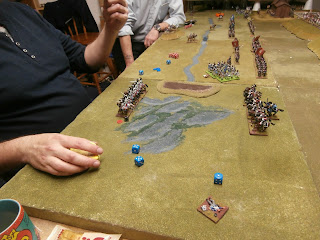 On the French right the Prussian launched an assault against the church which was held by a small force of Leger. Perhaps confused by the smoke of battle the Prussians underestimated the strength of the defenders and strayed closer then they intended, receiving a shattering close-range volley that drove back one unit of Musketeers. Undaunted the supporting Landwehr attacked but were easily repulsed. So one flank each.

So the finally to the centre of the field where the Prussians advanced their main force towards the hill proceeded by French position proceed by Fusiliers. This is a classic Napoleonic tactic but can be risky - the skirmishers are a hard target but are badly out numbered and subject the close range artillery fire.


On this occasion the gods favoured the Prussians and their skirmishing proved rather effective - damaging several French units and destroying a gun. A big lose of the French
And so finally the main lines clashed - again the firefight seemed to favour the Germans with several French lines pushed back from the ridge

As darkness fell the French clung-on to the ridge but several holes had been made. A winning draw for the Prussians on their first major outing.