Some military campaigns involved grand sweeps across large tracks of open country, but much more typical was seeking to dominate several key strategic features connected by a barely usable road network. This campaign depicts the later and pits French vs Allies in 1815. 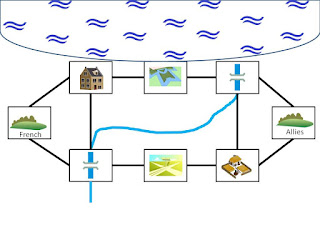 Both sides write orders for each turn and then play these through. Where both sides would meet on a connecting node then dice to see who falls back and defends (1D6, +1 for 50% more cavalry, +2 for 100% more). Units may move 1 connecting line per turn.  Each turn you receive 1 victory point (VP) per key point held.


In an encounter both sides deploy behind screens or from a map. If one side is defending then they deploy first but will have advantageous terrain

There are no draws unless it was an encounter. The defender wins unless driven off or the objective captured.


·         River Crossing: There is a village with two river crossings and a chance to find a ford (D6/turn per section finding on a 6). If you defend the far-bank then the river counts as held by you. If you defend your own bank then it counts as contested and a draw allows the attacker to remain. If it's an encounter then dice to see who arrived first as they have the choice (+2 if you have more cavalry)


·         Strategic Crossroads: Hold the crossroads and rout the enemy to count as held.


·         Fortified Position (guarding a major port): Hold the fort to count as holding the square.


·         A strategically positioned farm complex. Hold the farm to count as the winner.


You may deploy Infantry Division and a maximum of 2 supporting Brigades in a key point. You must have a command-level general to move troops, those without may only form a garrison.


Jagers / Rifles:  These can be broken-up before the campaign and a company allocated to an infantry brigade. They may not be later recombined though and whole battalions must be broken-up.


Light infantry: These may deploy half their number as skirmishers with the rest in reserve. The skirmishers deploy 12" in front of the reserves. Casualties are taken from the reserve.


Light Companies: These may deploy up to 12" in front of their unit. They don't trigger morale tests if lost but do count  towards overall casualties.


Heavy Cavalry: Cuirassiers and British dragoons count as "heavy" against other heavy cavalry.


British Cavalry: These must charge viable targets in range on 4-6 (D6). They will count as -1 melee as they are tired if they charge immediately following a melee, but have been made better as compensation.