As we completed our Armati mini-campaign a week early we decided this week we would refight a classic - the Battle of Cannae, pitting Hannibal against the Roman Republic. The Armati rules seem well designed to depict this type of clash.

This was a straight forward head-on battle but we deployed according to the accepted historical setup.
We used the Warflute.com Cannae army lists 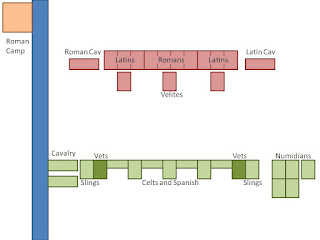 The African Vets and the Triarii may move after wheeling 2".

Both sides were deployed as per the map above. The Carthaginians were stronger on their left but had a fairly vulnerable centre. On the right the Romans looked outnumbered but had the benefit of troops with Impetus.

The battle opened with the Carthaginians attacking on their left with their heavy cavalry against the outnumbered Romans. As both have Impetus it would not be an instant victory so time to get stuck-in.
In the centre the Roman / Latin foot moved steadily forward proceeded by their Velites. The later proved somewhat effective scoring several hits on the Celts and Spanish. With the Romans at a disadvantage on the flanks they needed to cut through the Carthaginian centre in double-quick time.

Back on the left the Hannibal decided to throw his Veterans into the battle with the Roman horse. The Romans had carefully echeloned their flank so there was no immediate target and clearing the pesky Roman horse a turn earlier might prove to be useful later.

In the centre the lines closed with the Roman/Latin heavy foot engaged across the line with the Celts / Spanish. Early exchanges were pretty even and with the Spanish / Celts both counting as Break Point 4 in the Cannae lists, they were holding-on against the superior foe.

We've not looked at the Carthaginian right yet, where a horde of lights lined-up against the Latin horse. After a few turns of relative inactivity the Africans moved forward with skirmishers in support of the light cavalry and a unit on a flanking arc. This stimulated the Latins into a spirited advance to cover the flanks of their advancing infantry.

The African's launched an attack on the superior Latins but managed a flank attack at the same time, thus denying them the all important Impetus. Eventually the Africans emerged victories from the ensuing slogging-match, countering history.

Now came the serious business in the centre - could the Romans breakthrough before the African Veterans turned the flank and gobbled-up the line? On their right the Romans were successful at halting the flank attack through the timely intervention of the Triarii. Although the Punic horse was free is simply could not manoeuvre quickly enough to play much further part in the game.


On the Roman's left though, they were in serious trouble as African Veterans smashed into the exposed flanks of the Latins. In a few short moves they chewed through three Latin units and captured a roman general. It was not plain sailing though as the Romans dispatched a sizable chunk  of the Spanish / Celts in the centre.

The final toll was 6-4 to the Carthaginians who suffered the indignity of seeing Hannibal captured as he was carelessly left alone in front of several Roman Legions.

So the game largely followed history but with the Carthaginians only-just securing the win in time. One particularly tough Spanish unit held-out 2 turns longer than expected and a timely breakoff from the Celts spared them the axe.     ﻿