As we are about the start a new Napoleonic campaign we decided that this week we would hold a quick practice game to remind ourselves of the rules. We're retuning to a set we've played before - Rank & File from Crusader. Its a simple set with the now familiar IGO-UGO turn sequence and everything resolved on D6 with a few simple factors. 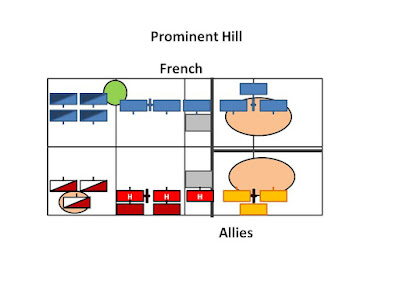 The scenario was based on A Prominent Hill in Charles Grant's Scenarios for Wargamers. Its a straight forward encounter battle in which equal forces attempt to dominate an important crossroads.
We played this game as French verses British / Hanoverians and Dutch-Belgiums, with 3*infantry and 1*cavalry brigade a side.

We deployed as per the map above so with cavalry facing-off on one flank and fairly even infantry deployments across the centre and the hills.


﻿ The battle opened with both sides advancing their cavalry on the flank to close with the enemy. For this game we rated the British Hussars as Veteran but impetuous - this game them an edge of the Regular Dragoons that may prove decisive.
Early exchanges were even with both sides winning one of the melees but being pushed-back on the other.

In the centre the infantry lines advanced towards each other, with the British / Hanoverians were the more aggressive as they sought to close the distance rapidly. This took them further from their supporting artillery than the French, who got the better of the early firefight, pushing back the Hanoverians.

On the hills both sides adopted a similar approach - deploying on the heights and seeking to extend the flank on the outside. With both sides evenly matched it was the French decision to focus their initial fire on the British artillery that proved important. the British guns were weakened which enable the French artillery to support their infantry and push the Dutch-Belgium's from the heights.

As the battle drew to an end honours were pretty even in the cavalry melee but the French had won the infantry firefight with the help of their artillery.

So in the final the advantage rested with the French and their more deliberate approach.  A good practice game though and we ironed-out a few kinks. Our main change was to remove any shooing disadvantage for shooters to encourage attacking play, and that worked fine.