In the first week of the campaign the Roman advance was halted by a Dacian victory, forcing them back onto their fortified camp, with the Dacians in hot pursuit. So for our second game we added some terrain, mostly in the form of a large Roman camp in the centre of their deployment zone.


For this week's battle the Romans adopted a different strategy than previously. On their left they massed all the infantry and cavalry to mount a single determined thrust, relying on deploying deep to prevent themselves being swept away by the Dacians / Sarmatian charges. On their right was a sacrificial command of entirely non-key Auxiliary troops who would delay the enemy long enough for the  legionaries to do their bloody business.


The Dacians adopted a more balanced approach. They massed the bulk of the tribesmen in the centre with more mobile forces of Falxmen and cavalry on the flanks. The fearsome Sarmatians were located on the Dacians right with a large force of skirmishers to their front to soften-up the enemy.

The Roman plan was a simple one - to rapidly engage the Sarmatians and tribesmen with their best troops whilst hoping to hold-off the remainder of the Dacians through a delaying action, aided by their poor movement when wheeling. The Dacians immediately spotted the danger and so threw their skirmishers forward, held the right (Sarmatians) and tried to engage with their mobile left flank units as quickly as possible.

The Dacians met with some initial success as their Javelinmen were able to score hits on three of the Roman legionary units, a good result that could hurt the Romans later.

Undaunted the Romans pressed ahead on their left flank, with the cavalry managing to engage and destroy a unit of Falxmen without suffering any casualties, having first dispersed the skirmishers protecting them. The Legionaries shrugged-off the casualties and continued towards the main Dacian line, pushing the skirmishers ahead of them without any further damage.


On their right the Romans quickly came to blows with the Dacians and Sarmatians, commencing a tussle to decide the game as both sides had primarily key units engage. The early rounds were fairly even with casualties and fatigue mounting across the line.

A key advantage for the Romans is that they can withstand more damage and fatigue than the weaker barbarian units. After a few turns of combat this began to tell as they breached the Dacian lines killing a couple of units. This opened-up the all-important flanks and allowed the Romans destroy sufficient key units to break the Dacians.

Observant readers will notice that I've not mentioned the Auxiliary assigned to slow the bulk of the Dacian army and create a (hopefully) winning flank on the Roman left. Unfortunately most of my photos did nt come out so apologises for a mainly textual description.

The Auxiliary deployed to protect the flank of the main advance and also in the area of the camp. They were able to keep-up a good barrage of fire on the advancing Dacians and prevent them wheeling rapidly to engage the flanks of the main Roman attack. Although were mostly destroyed by Dacian charges, they did score a couple of valuable kills and buy the time needed for the Legionaries to win.
So the final result was 6 Dacian key units killed to 2 Roman. A Roman win that forced the Dacians back onto the defensive in the campaign.  The game lasted about 2.5 hours and was played to conclusion over about 10 turns

Now we are becoming more familiar with the rules the games are progressing rapidly with long movement distances and quick mechanics. We certainly felt the Romans exploited their superior initiative and manoeuvrability to gain an advantage. Despite the 6-2 result the Romans had several units within 1 hit of dying so it was closer than the raw numbers make it appear. 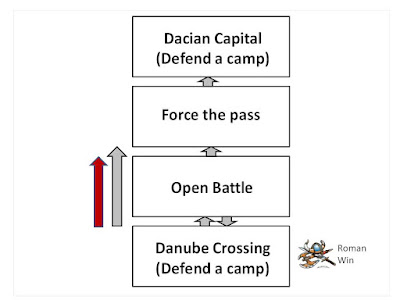