For our Christmas all-day game we decided to return to the War of Spanish Succession - we've always loved the look of the games. The scenario selected for this game was the Battle of Aughrim, July 1691, which was the last major battle of the Williamite Wars in Ireland. We used Beneath the Lilly Banners from League of Augsburg as all our troops are already based for this. 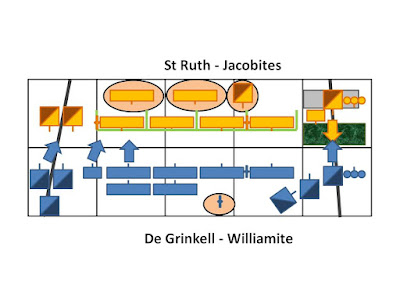 In the historic battle a polyglot force of English, Scottish, Danes, Huguenot French, and Dutch under General De Grinkell attacked a well emplaced force of Jacobite Irish. The Irish were protected by a network of fields to their front and one flank was guarded by a village only accessible across a narrow causeway.

For the refight we lacked sufficient Irish so pitched Richard's British forces against Nigel's Dutch, Danes, and English. Both sides has 14 infantry battalions with the Williamites enjoying a  6 - 4 advantage in cavalry regiments.

The Williamite plan was a simple one - they would mount their major attack on their own left flank where they enjoyed a 3-2 cavalry advantage and had positioned their elite infantry. This would place them against the open flank of the Irish forces. In the centre and on the right they would mount enough of an attack to pin as many of the Irish second rank as they could.


For their part the Irish adopted a fairly simple plan - having a good defensive position they opted to largely hold their ground but with a cavalry thrust on their right (so facing the Williamite attack) rather than sit back and await their fate. There was some debate about the possibility of an infantry attack in the centre that rumbled through most of the game but never materialised.


On the Williamite right the battle opened with the Irish sending a cavalry unit forward over the causeway and into the waiting English horse. This unit was thrown-back but a supporting squadron was able to thrown-back the English in turn. After a few rounds of cavalry thrust and counter-thrust the English superior numbers told when a regiment was able to charge straight over the causeway, rout an Irish squadron and pursue straight into the baggage . By the close of play the English had not managed to establish a foothold but had tied-down valuable troops that might have helped their right flank.

In the centre the Williamites adopted a cautious approach as they were slightly outnumbered and faced troops who were well protected in the fields that covered much of the battlefield. An initial bombardment from the English heavy guns was enough to force a couple of Irish regiments back, but as the gunners tired there began a slow advance by the Williamite foot. Reluctant to close with the well positioned Irish foot they commenced a long-range firefight that kept the Irish sufficiently interested to largely pin them in place.


So it was all on the shoulders of De Grinkell and his main attack against the Irish right, which was the weakest part of the line. The Williamite horse launched an immediate attack against their opponents with support from the Guard infantry. Initially the Irish seemed to be holding, but outnumbered eventually they succumbed and the Williamite horse was able to secure the flank ready for an infantry attack.

With the flank secure the De Grinkell sent his crack Danish troops into the exposed end of the Irish line. After a bloody tussle they were eventually able to breakthrough the Irish lines and with support from the remaining horse they began to roll-up the Jacobites. As the light faded (and more of Neil's wife's cake beckoned) we agreed that the Jacobite's had lost heart and would quit the field.  ﻿


﻿﻿
The end result was somewhat close to history with the Williamite forces mounting a successful attack against the Irish right, which was the weakest in terms of its natural defences. The real battle was decided when the hapless St Ruth was decapitated by a cannon ball at a point where the battle was still in the balance. His untimely death caused the Jacobite's to lose confidence and withdraw.
﻿﻿
﻿

Email ThisBlogThis!Share to TwitterShare to FacebookShare to Pinterest
Labels: WSS