This week we began our Armati odyssey under Roy's patient tutelage with the opening battle of our mini-campaign, which featured two 75point armies meeting in a pitched battle on a fairly open field.

Once I understand Armati better I'll post a better review but a few initial impressions at this point. Armati is a fairly old set of rules by modern standards - I have Edition 2 from 2003 but the original is from the 90's. Its from the pen of noted designer Arty Conliffe (Shako, Tactica, Crossfire etc). The guts of the combat are pretty simple with units rolling off against each adjusted by a few factors, but most of the variations are captured in Fight Values (FVs) that vary depending on the situation the unit is in e.tg. frontal combat, flanked, or rough terrain.

The core concept though is C&C and manoeuvre. There is no command friction as such, but limits on how many groups of units you can control depending on your army. Also moves other then straight forward tend to be pretty restricted so you need to plan ahead and can nt rapidly react to the unexpected without well-placed reserves.

Both sides deployed with a little assistance from Roy as it was our first game. The Romans deployed towards their left of the deployment zone with a solid core of Legionaries forming their centre. The limited cavalry protected the Roman's left and the Auxilia, bowmen, and skirmishers protected the right. A single unit of Legionaries in column was held in reserve.

The Dacians formed a solid block covering most of the central section of the table with Sarmatian cavalry on their right flank supported by bows and falx men. The Dacians left was more lightly held by skirmishers and cavalry.


Two opposing plans were at play in this battle. The Roman's aimed to smash Dacian foot and so destroy enough core units there to rout them, whilst delaying with non-core units on the flanks to give time for this. The Dacians sought to hold back in the centre and win on their right so they could flank the Roman infantry.


The battle began with the Romans advancing across their line and the Dacians advancing their flanks to try and envelope the Romans. On the Roman right their forces proved more successful than they had expected as they scattered the Dacian skirmishers and were able to block a cavalry move around the flank. 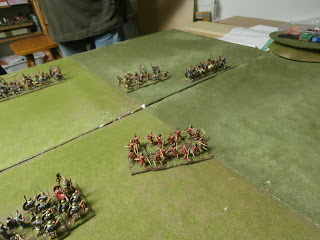 On the Dacian right the action favoured them as they had perhaps hoped. The Roman cavalry scattered the Dacian archers but proved little more than a speed-bump to the Sarmatian cataphracts. Over the coarse of a couple of rounds they were able to smash through both units of Roman heavy cavalry.


Over on the Roman right with the cavalry under control, the Auxilia and skirmishers were able to move to support the main Roman line. Although not a match for the Dacians they were able to delay them and being non-core they did not impact on Roman morale.

Returning the Dacian right we can see that they have disposed of the Roman mounted, but the reserve Legionaries pushed forward and were able to charge the rear of one unit of Sarmatians, easily destroying them and forcing the other to ride for safety and so out of the battle. The supporting Falxmen had moved in a wide arc which put them some distance from the main action.

So whilst the Romans had lost 2 core units to 1, they had managed to occupy a strong Dacian force with a smaller one. So not perhaps as bad as it looked at the time! 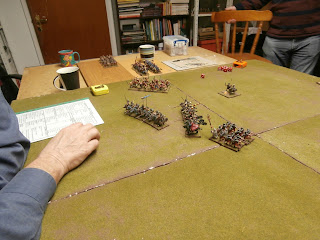 In the centre the Roman heavy infantry finally made it to the Dacian line and began to grind away at the tribesmen. The Romans were deployed wide, which extended the line but made them vulnerable to being swept away and meant most were outnumbered by the Dacians deployed in depth.

The action ebbed and flowed a little until the gods of war intervened. The Legionaries on the Roman  extreme left threw poorly at a critical time, exposing a flank that led to another Legionary loss. This meant the Romans had hit their break point (4 core units). 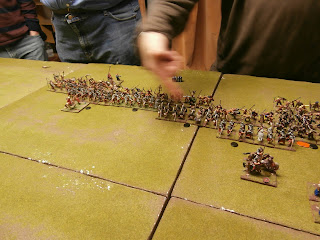 So the final result was a 4-3 win for the Dacians, so a pretty close result. Things could have easily been different with better dice from the Legionaries or with some skirmisher shooting that nearly broke the Dacian right.

Part 2 next week will see the Romans falling back on their bridge-head over the Danube in more defensive mode. 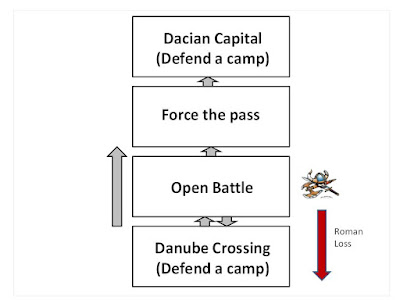