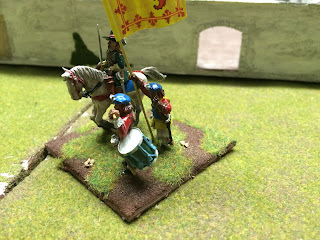 Our latest venture is a campaign set in Scotland during the ECW and featuring the charismatic Marquis of Montrose. The rules are set out here and for reference also in the ECW section.
http://cirencester-wargames.blogspot.co.uk/p/english-civil-war.html

For this campaign we are adopting an modified version of the Victory without Quarter, which I have dubbed Victory without Cards. The principal change is the removal of the card-based activation system to make it more amenable to multi-player use. This naturally ripples through the rules and requires changes to things like flank charges.

Famous by my sword - the campaigns of Montrose

1. Between 1644 and 1645, James Graham : 1st Marquise of Montrose, led the King's armies in Scotland in a campaign that criss-crossed the country. He fought seven major actions and defeated a number of Covenanter commanders. His most famous enemy though was perhaps Archibald Campbell: 1st Marquise of Argyll.

2. This campaign recreates that struggle and in particular focuses on two aspects:
·         Montrose often had the strategic and tactical initiative - fighting when and where he chose on most occasions.
·         Army sizes could vary greatly depending on morale, time of year, clan politics, and interventions to/from England.

3. So in this campaign movement is somewhat abstracted, with success measures by territories loyal to each side not necessary occupied by each side. The system should also work as a solo campaign with some minor adjustments.

4. Each turn represents a month and is marked-off on the campaign calendar on the map. There are penalties for fighting in the winter. These are stiffer for the attacker than the defender as they will be further from their supply bases.

6. Optional Rule: Both sides could have two commanders. They are Montrose / Alasdair MacColla and Argyll / Lieutenant-General Baillie respectively. Both of the Royalists may launch an attack each turn. You might also allow both sides to attack alternatively if you want a more active Covenanter side.

7. Each turn a player may "play" up to 3 territories to support his forces. Territories can confer both forces and a tactical / strategic advantage in the coming battle. These abilities are rolled-for the first time a territory is fought over and remain the same for the rest of the campaign. 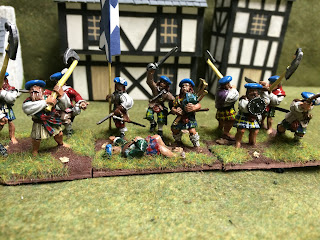 8. Both sides will field armies that consist of core units and then are supported by various auxiliaries depending on the territories held. Core troops are refreshed for each battle and auxiliary troops are only used for that game. Dice for both type and quality of auxiliaries, only using outcomes for which there are figures available.

9. [Design note] These army lists reflect the figures we have available. They are probably over generous in terms of the numbers of mounted troops. All classifications are for Victory Without Quarter rules.
*  = Montrose units only, Covenanters are always Trained
# = max 1 per army. If no highlanders available Montrose may take a medium gun
If the correct figures are unavailable them roll again.

10. To avoid all the battles being head-to-head slugging matches two elements of randomness will be introduced to the action:
·         Firstly a scenario will be selected which specifies the deployment, victory conditions, and terrain type for the battle.
·         Secondly terrain will be determined by drawing an appropriate card from the terrain deck. We are using the excellent cards from Perfect Captaine.


Weather and time of year

11. The weather in Scotland can by notoriously changeable, so roll before each battle to see what mother nature has in store for you.

12. It is assumed that the attacker would suffer greater attrition in the winter than the defender who is tucked-up in his warm hovel. If Montrose attacks in the winter both sides dice to see if their morale is reduced for that battle. On a 5 per unit Montrose lose 1 morale class and on a 6 by 2 morale classes. On a 6 the Covenanters lose a morale class.  The battle will always be a flank attack and Montrose will be the attacker.

13. The structure is inherently suitable for solo play as only one side will be attacking strategically. So the solo player will take the role of Montrose. 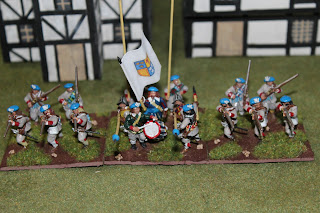 14. Armies: As a solo player you could model the gradual growth of Montrose army as he won battles and rely on the inherent weakness of AI to counteract the bigger  Covenanter forces. You should start with the Irish and Highlanders only. Add the Gordon foot after 1 win and the Gordon horse after 2 or 3 wins.

15. Territories: If the Covenanters acquire neutral territory then choose it randomly. If they have more than three territories then roll to see which they use.

16. Battles: Use your favourite AI to model the Covenanters deployment and movement. You may find the original Victory without Quarter to work better for solo play as the card based activation system gives natural friction and works well for the solo player.

Roll separately for both reinforcements and strategic effects. 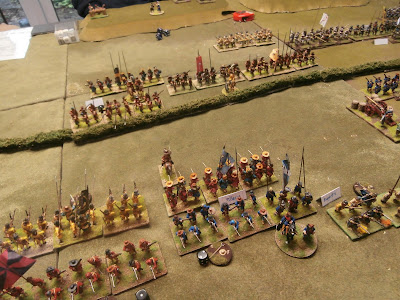 17. Games are played on a 10' table with a 4' wide centre, 2' wide wings, and 1' flanks. Water counts as streams  / marshes unless otherwise noted. Units are Brigades, regiments, or unbrigaded dragoons NOT artillery.