For our final game we decided on a Battle Royal - a variation on the Bloodbath scenario, with three 20 point retinues per side. For the Crusaders it was Knights Hospitaller, Teutonic knights and the English. The Saracens fielded a large force of mounted and infantry, pretty much all the figures we had. The scenario was simple (destroy the enemy) so we threw in a few Boasts to liven things up and a Princess to be rescued and returned to her father.

The wargames gods were cruel to the Saracens as they were forced to deploy all three of their retinues before the enemy. This enabled the Crusaders to deploy their best defence forces (the English) against the massed Arab cavalry attack on the Saracen left.

As its a large game it is perhaps best described by zone rather than strict chronology.

On this flank Stuart the Elder's Hospitallers made their first outing against the Younger's Saracen's. Things started badly for the Arabs with the horse archers failing to evade and being destroyed. A unit of Saracen heavy cavalry also feel victim, until a well-timed flank-charge ended the knights run and saw the Grandmaster struck-down leading the attack.


﻿﻿﻿
Some bad dice meant the Hospitaller infantry was late to the fight and made limited progress. It was advantage Crusaders though as they had done the most damage.

The Arab force on this flank was entirely mounted with 2 units of horse archers and about 5 of heavy cavalry. Usually this would be a powerful force but they were up against the English in a good defence position.


The Arabs were eventually able to wear-down the English and dispose of a couple of units including one of the longbow men. The Saracens were well-placed to turn the flank.

If the flanks had been decisive then the centre was much more sew-saw. The battle began with a strong Saracen advance seizing both the wood and the farm in the centre. The Arab skirmishers managed to rescue the Princess and spirit her away to safety. The Saracen archers also won the archery duel with the Teutonic crossbow men and forced them back. So far so good for the Saracens.

However as we all know things are never straight forward in Lion Rampant and a couple of bad turns can decide the outcome. The first Saracen misadventure was that the Fierce Foot found the Teutonic foot knights an irresistible target and both charged head-long into the fray. Bad move - they were quickly dispatched for minimal casualties.

At this point the centre suddenly began to look weak. Infantry had to be diverted to the Saracen right to counter the Hospitaller advance, leaving it short-handed as the Teutonic mounted knights rumble forward through a couple of units.

With loses mounting fast in the centre only a unit of Saracen spearmen stood farm in the farm. With hedgehog formation and cover they had a  might 5 Armour and were pretty-much untouchable.

﻿ With the game all but lost Saracen commanders issued a challenge to single combat to the Teutonic leader. Amazing he managed to win the combat rolling 2 sixes! Even that was not enough though as the Saracens had lost too many points to have any hope of winning. 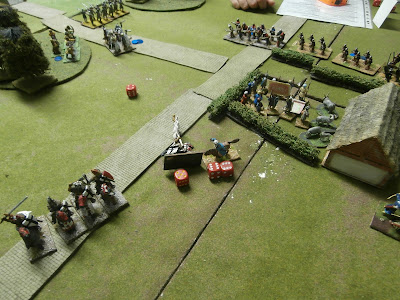 So dear reader that is the end of the battle and of the campaign. The Crusaders won the final battle and claimed the campaign with a last-gasp victory after being behind for much of the time.

Overall a fun campaign and a fun set of rules once we learned not to take them seriously. The big plusses were the small  / colourful armies and the ability to fit 2 or 3 games into an evening.  The introduction of the flanking rules and allowing a reroll if your first go failed helped the play too.