To kick-off the new campaign we began with a simple practice game. We played a pitched battle with the core forces, so about 8-12 units a side


Both sides deployed in a fairly classic manner with cavalry on one flank and infantry in the centre. Montrose had one more unit with his highlanders, so was able to slightly extend the flank.
﻿


As a treat for the assembled masses (but with a cavalier disregard for lent) Roy provided a Mark I Boss Trifle.
The battle opened with both sides cavalry wings pressing forward to come to grips with the enemy. Leven had the better of this open exchanging with one unit of Montrose horse routed and the other gradually pushed back. This endangered the main Royalist in the centre as the flanks of the Irish were exposed.

In the centre the Montrose forces advanced with the Irish brigade and highlanders to the fore. The veteran Irish met with considerable success routing two units of Leven's infantry and blasting a hole in the centre. The cavalry rallied sufficient units to stabilise the flank of the Irish. 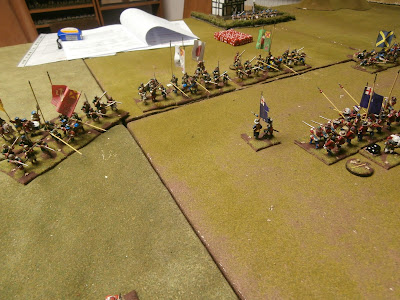 
The game ended with half the Covenanter forces routed from the field and a resounding victory  for Montrose.

A couple of rules tweaks are planned as artillery proved rather too ineffective if they only cause a morale test when a casualty is caused vs a hit.