Shadow of the Eagles campaign - Helmstedt, Part 2 and bonus Liebertwolkwitz

At the end of last weeks play we were 5 moves in and the Prussians had just arrived on the field to bolster the flagging Austrians. In terms of losses the Allies were 7 /10 and the French were 5/ 9 so both only needed to lose 3 or 4 units to  be defeated. None of the objectives (with 2 kills) were captured.

The French pushed forward as they had the advantage hoping to break the Austrians before the Prussians could make their presence felt. Turn 6 saw light casualties on both sides but in turn 7 they were able to break 3 Austrian units and take the victory. 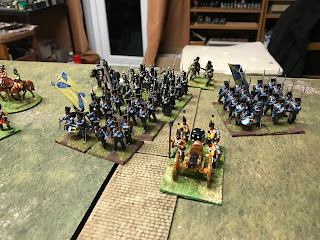 The key move was the decision to push forward with some fairly fresh units so that they shielded the most damaged French units from fire and stopped them routing. So a pleasingly close affair with  French coming out 1.5 kills ahead. 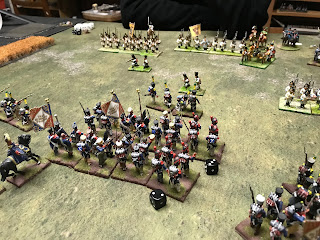 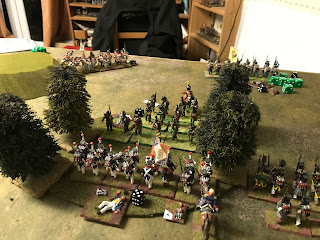 I think the decisive moment was about a third of the way through when the Austrians spotted they outnumbered the French in the centre and so decided to attack rather than waiting for the Prussians. This could have destroyed two French units and netted them an objective but accurate artillery fire blasted them and the attack failed costing them 3 units lost to 1.

Having a couple of hours play left we staged a quick battle based on the great cavalry battle at Liebertwolkwitz that preceded Leipzig. Both sides had 2 light cavalry brigades, 3 heavy brigades and a battery of guns. The aim was for the Allies to break through the French lines. 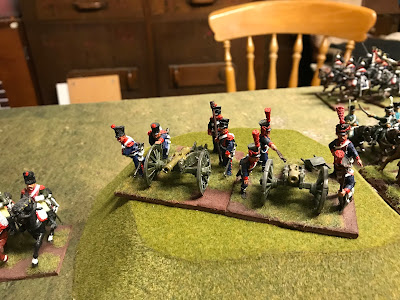 The allies attacked on both flanks whilst the French focused their attack in the west where most of their heavy cavalry was located. 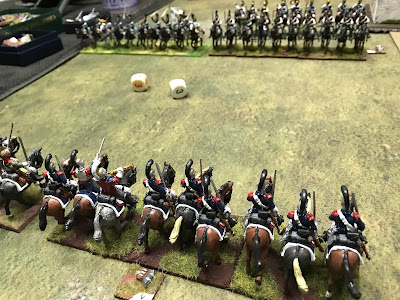 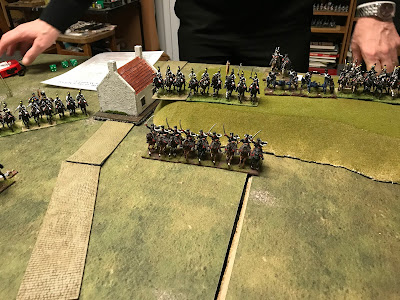 Cavalry is pretty bloody and needs a slice of luck we declared it a draw after 6 turns play. About 25% of the Allies could have got off but were pretty damaged. The rest has been routed and the French controlled the field.