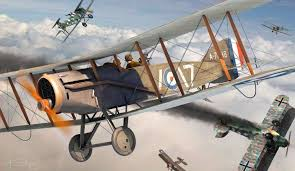 Since we had a couple of scenarios we'd not played we decided to do those this week . Both involved 3 defending fighters vs two attacking fighters and two observation / bombing aircraft. The Germans had to find a hidden British artillery battery (1 real from 4 blinds) and the British had to bomb 2 or 3 German supply dumps.

Both games were pretty tense with the Observation aircraft proving far from helpless and the ends of both games being very close. The Germans had to dive with a critically damaged Observer to win and the British just managed to bomb both targets and escape with one plan.

Sadly Mike's Ace bit the dust but both John and Richard were promoted. The laurel wreath denote 5 kills, putting Richard on 6. 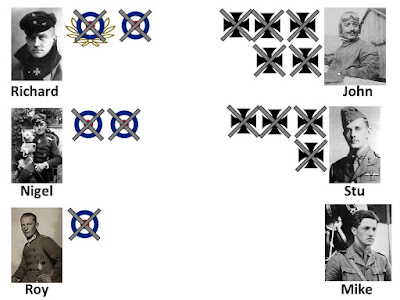