Snakes in the grass...more Kings of War Lizardmen

I'm about two-thirds of the way through painting my Lizardmen army - this weeks output is just a couple of units.

First-up is a unit of heavy infantry which can be used as either Primes or Ancients from the Salamander list. These both form the infantry core of army.


The includes a mounted officer as I had a few Ancients riding Coldones left over from the units I wanted to build.  All figures from Games Workshop.


Secondly I have some chaff units in the form of a horde of snakes (or two regiments). These do not feature in the Salamander lists, so will instead be fielded as Tidal Swarm from the Trident Realms list. Cheap and nasty they feature high attacks but virtually no defence.


The models came as ground clutter with the Game Workshop Coldone riders, but I had so many it seemed worth doing a unit of them. 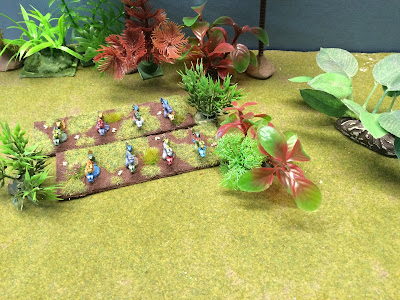