This weekend we were hosted by Lewisgunner for a game of vintage Leipzig staged by Stryker from http://hintonhunt.blogspot.co.uk/. As usual for Stryker's games this was a very large-scale affair featuring 1000's of 20mm Hinton Hunt (or compatible) figures from his and Lewisgunner's collections. As luck would have it the actual battle took place in October 1813 so it was the right time of the year.

We had 8 players - 3*French, 1*Polish, 1*Austrian, 1*Russian, 1*Prussian, and 1*Swedish. I played the part of Prince Schwarzenberg, leader of the Allied armies, which  gave me command of the Austrians and the Reserves. Stryker will produce an official account so I will just focus on my bit of the battlefield.

I found myself opposite Poniatowski's Poles on the left and centre of the Allied line, with both Leipzig and an outlying village as my objectives.


We both decided to advance boldly, with some suggestion that Poniatowski was simply keen not to hang around Leipzig for fear of ending-up in the river! The Polish cavalry attacked on my far-left against the artillery but a few rounds of brisk fire quickly saw them off. On my left I was able to shelter some cavalry in the lee of the village and threaten the advancing Polish columns so they were forced to form square - classic Napoleonic's.
Seeing the Poles form square I quickly shook-out my leading infantry into line and advance the guns to offer support. I was hoping for some deadly fire against the massed infantry.

With the Polish advance effectively stalled I was able to push forward into the village and launch an assault with 2 infantry columns. This proved very effective and I was able to throw-back the defending Swiss with only minimal losses.

With strong support in place the village was not seriously threatened for the game and I could turn my attention to the Poles again.

Stuck in square and bombarded by artillery the plucky Poles were rapidly whittled away and the front rank on units retreated back towards Leipzig.

I was unable to make much progress against Leipzig itself though as several battalions of French Guards appeared and secured the city. At least that drew them away from the Russians though. In a desperate gamble Poniatowski lead a headlong charge across the front of the Austrian lines to attack the cavalry pinning his infantry. It was a bold move but a bloody one with only Poniatowski and his personal staff making it to the Austrian lines.

I will leave the final result to Stryker's Blog but a satisfactory result in my sector - a village secured, the Poles badly mauled, and the bulk of the reserve infantry drawn-off. To the (marginal) victor the spoils. 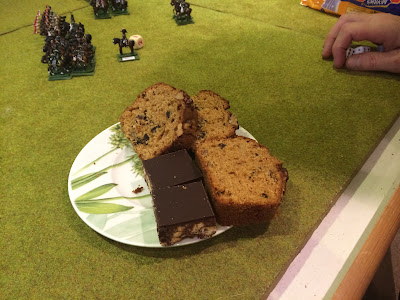