Following last weeks draw the Axis forces shifted their line of advance and attacked down a road towards a narrow river. Their aim in this weeks Attack on an Objective scenario was to capture and hold the bridge.

The patrol phase ended with the Russians deployed in a shallow arc around the bridge and the Axis forces occupying a fairly central position across the road. Honours very much even at this point.

In contrast to previous battles the Russians had chosen to deploy early and in some strength with AT guns, Maxims, and Infantry all appearing in the first turn of the game. They also deployed their KV-1E, which rattled forward at maximum speed (not likely to break any records) across the river and through the fields.

On the Axis side the Germans deployed into the woods and hedges on the left of their position but were cautious about advancing given the Maxims awaiting them. On the Axis right the Finns faced weaker opposition and so advanced through the corn towards a likely-looking hill. The Russians countered but miscalculated and crested the rise to be met by withering fire that routed them from the table.
On the left the KV-1 pushed forward and began shelling the German positions. It caused limited casualties but kept the Germans pinned to the base-edge. The Germans deployed a Pak-38 to counter the KV but its 50mm gun proved ineffective and the crew quickly feel victim to raking MG fire from the Russian tank. To press home their advantage the Russians then deployed their SU-76 tank hunter.

At this point things booked fairly good for the Russians - their armour was well advanced and infantry in place to defend the bridge. So the Axis played their final cards bringing on the Panzerscrekt teams and the Finnish BT-42 assault gun.

Its fair to say they had an immediate impact on the game and galvanised the Axis efforts. A volley of Panzerscrekt fire left the KV-1 disabled and a pin-point accurate shot from the BT-42 took-out the lightly armoured SU-76. It then turned its attention to Russian AT gun - killing three crew and destroying the gun with a single turn of firing.

At this point the Russians were forced to withdraw from the table - with no effective AT they were at the mercy of the BT-42 assault gun. With its 4.5 howitzer giving an HE rating of 9 it was clearly capable of simply annihilating section after section of the Russians infantry force with no damage to itself. It was however a close game until the unlucky loss of the KV-1, with the addition of an extra  senior officer to each Soviet platoon making a big difference to their competiveness 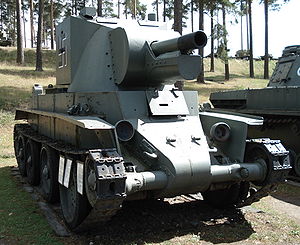 So this weeks Star Baker goes to the Finnish BT-42. The assault gun is a mongrel based on the Russian BT-7 light tank with a new turret carrying the British 4.5" howitzer. Introduced in 1943 the cumbersome tank proved useful as a bunker-buster but pretty ineffective against enemy armour. They were retired in 1944 in favour StuG  III's.
Posted by Wargamer Stu at 06:01

Email ThisBlogThis!Share to TwitterShare to FacebookShare to Pinterest
Labels: Chain of Command, WWII