Following the success of last week's Probe mission by the Axis forces, this week they launched an armoured attack designed to break-through the Russian lines. So we played an Attack on an objective scenario, with the Axis aim being to capture the church that commanded the main road towards the campaign objective.

The church as a recent purchase from Colours and is an MDF laser-cut model from Charlie Foxtrot. Its not quite finished but I could nt resit using it anyway. In a future blog I'll do a full review of the model. 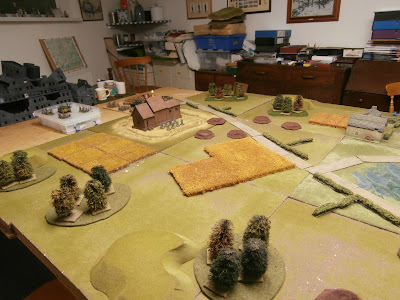 The patrol phase ended with the Russians holding the church and most of the right side of the table. the Axis were restricted more tov their base-edge, but critically had secured a jump-off point in some woods on the right side fairly close to the church.

The game began with both sides deploying their armour and countering the enemies with their own AT guns. The Germans has an armoured platoon for a Panzer IV, a STUG, and a Hetzer. Facing up against that was a KV-1. First into action was the German Pak43 which damage the KV-1's engine. Although immobilised the Russian brute was proving impossible to destroy.
These early exchanges favoured the Russians through with the Germans losing 2 AFVs.

Whilst the Russians were mauling the German armour their infantry were busy deploying the whole force (3 x squads, am MG42, and a Panzerscrekt team) from the jump-off point near the church.

This proved a decisive move as the weight of fire meant they could destroyed the more piece-meal deployment of the Russians around the church. Critically they advanced and captured the Russian jump-off point near the church - denying them the ability to protect the flank.


﻿
So with a base of fire firmly established in the woods the Germans were able to rake the church with fire and advance steadily on their objective.
﻿
﻿
﻿

The game ended with the Russians conceding the church to the victories Germans. The KV-1 remained in action but was unable to move to counter the advancing German infantry. This was one of the closest games we've fought with both sides ending very close to having a platoon broken.

Email ThisBlogThis!Share to TwitterShare to FacebookShare to Pinterest
Labels: Chain of Command, Russian