The campaign opened with the German Fallschirmjäger probing the Soviet defences. The Russians were dug-in in a series of fields and woods covering the main road towards the besieged friends of the Germans.
﻿﻿﻿ The Germans made a bold move by deploying their armour (a Marder III) right at the start of the game. 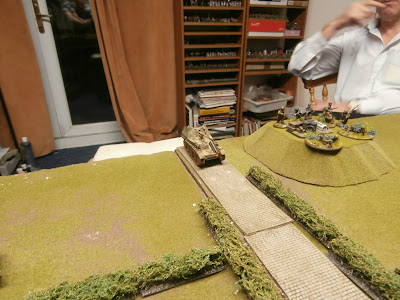 It was immediately ambushed by a concealed Soviet AT gun that ripped through the thin Marder armour like a knife through low-fat vegan spread.

Denied their armoured support the Germans now deployed their infantry in cover of the table edge. The Soviets reciprocated occupying the woods and fields opposite them.
﻿

The game settled down into a fire-fight with Hitler's buzz-saws rattling away at the Russians. The Germans focused their fire on the Soviets occupying the woods to their flank. The combined fire of 6 MG 34's proved highly effective first pinning and then routing both an infantry section and a maxim.
However the scenario required the Germans to advance to try and exit the table edge, so undercover of the 1st sections MG 34's the 2nd and 3rd sections tried to storm forward to capture the woods.


Yes gentle reader you guessed it, the combined fire of a maxim and 2 Soviets sections took a heavy toll on the Para's as they toiled forward across the muddy fields.
So with the Marder and 2/3 of the infantry out of action the German commander called-off the attack and they returned to the start line - first blood to the Soviets  ﻿