After a short break over the summer we resumed the Montrose ECW campaign. Following a recent run of success Montrose was now well ahead with Scotland very close to falling entirely to the Royalist forces. This would therefore be the final battle of the campaign should Montrose win.

Once again this was straightforward pitched battle with both sides seeking to inflict maximum damage on their opponents - the winner being the first to rout 50% of the enemy. The victory markers in the village each counted as 1 routed unit. 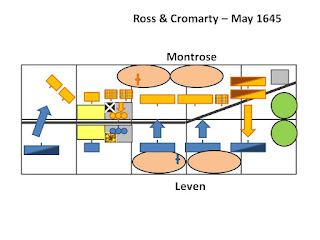 The two sides adopted slightly different plans on this occasion. The Covenanters launched a general assault on their right and centre but refused their left as they found their cavalry facing foot. Montrose went for something closer to the Bulls Horns with Horse attacking on the left and Highlanders and Gordon foot on the right,

On Montrose right his Raw lowland foot made good progress against the Covenanter horse but the highlanders were repulsed by the Veteran Forlorn Hope holding the village. In the centre the Covenanter foot advanced steadily in two lines - this looked a strong position as Irish Brigade was thinly spread with no reserves. The Wargames gods are fickle though, and for the second battle in a row the Irish Brigades shooting was deadly, quickly destroying the first rank of attackers.

Over on Montrose left the Horse made good progress against their outnumbered opponents and were able to push them  back, threatening the flank of the Covenanters. In the centre the slaughter continued with the Irish brigade routing several units of the enemy foot for little apparent damage.﻿

In a slightly bizarre, but understandable, mix-up the Covenanter lancers on their left launched an unsupported frontal charge on the Gordon Foot. It turned-out the blue bonnets had led them to believe they were Highlanders. Needless to say it did not go well for the Horse.

With the centre crumbling, and the flanks in trouble, we reached the point where 50% of the Covenanters had routed. So a third straight win for Montrose.

This victory meant that Montrose had taken a decisive lead and was 9-5 ahead in territories held. By common agreement we felt that Scotland had fallen to the Royalists and so in  June 1645 the Covenanters sued for peace. 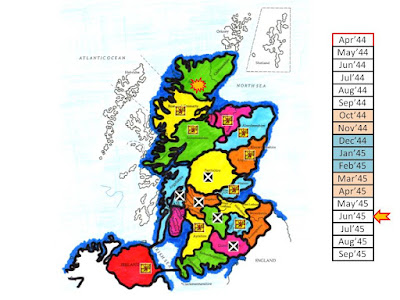 So all-in-all a strong showing for Montrose and it was nice to play a campaign through to conclusion over a period of about 4 months. Some reflections from my perspective:

1. The games looked great and with the addition of Stuart the Elders troops we were able to field some large armies which added to the spectacle.

2. Our various tweaks to the rules worked pretty well, with large battles (15'ish units a side) fought to conclusion within 3 hours every week.

3. The simple campaign system provided some benefits to winning but obviously limited strategic scope. With both sides attacking and perhaps the territory rewards known in advance this aspect could have been enhanced.

4. Creating overlaps was the key to success as this enabled you to rapidly create unsustainable damage on the enemy. Montrose seemed to manage this more often than the Covenanters. Cavalry combats were too slow and bloody though, so in-effect they cancelled each other out and even the winners were unable to take any further part in the game.