Following the completion of our recent Montrose campaign we deiced to tackle a larger battle over a couple of evenings, so we could use almost all of the figures we had available - my troops as the Parliamentarian's and Stuart the Elder's as the Royalists. So I settled on First Battle of Newbury as the right size and with some local interest.

﻿﻿﻿﻿﻿﻿﻿ First Newbury occurred in September 1643 and pitted Essex against the King. The Royalist forces had attempted to besiege Gloucester but were forced to withdraw when a Parliamentary army under Essex marched from London to relieve the defenders. Although denied Gloucester the Royalists realised that a decisive defeat of Essex would leave London virtually defenceless, so they resolved to bring him to battle. A game of cat-and-mouse ensued, including a cavalry action in Cirencester (perhaps the last real excitement the town has seen), culminating in the Royalists getting ahead of Essex and forcing him to fight to secure his route back to London.

The battlefield of Newbury was dominated by three main features. To the north was an area of lanes and fields representing a closed area unsuitable for cavalry action. To the south was Wash Common, a large open area of high ground. Finally in the centre was Round Hill, a strong defensive position with good fields for fire for artillery. Rupert's cavalry scouted the field before the battle but somehow missed Round Hill and so this was occupied by Essex and proved to be one of the key objectives for both sides during the coming battle. 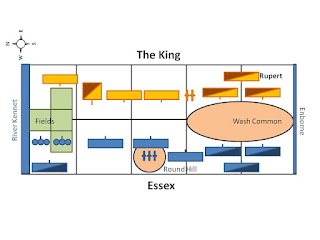 Parliamentary Forces
Troops defending Round Hill were given soft cover and the artillery overhead fire ranges shortened to 4" as we only had a 4' deep table. Rupert's lifeguards were rated Veterans as are the London Trained Bands.

The Battle - Part I

In the southern part of the battlefield the action began with a general advance by both sides Horse onto Wash Common. The Parliamentary cavalry were the first to crest the rise and so charged (well trotted) headlong into Rupert's troopers.

Initially things seemed to go well for Stapleton as he was able to push back one of Rupert's regiments and halt the other in its tracks. Seeing this Stapleton took the decision to pull back his reserves in the hopes of keeping them fresh for later in the battle. Rupert's plan was different as he committed his Lifeguards to stabilise the position.


Inevitably the Royalists greater numbers told and they were able to push-back the Parliamentary mounted. What would prove more useful the initial victory or the fresh reserves ?


In the north there as an initial advance by the Parliamentary Dragoons as they sought to exploit the cover to begin sniping at the Royalist foot deployed in the open beyond the fields. Given their swifter movement the Dragoons established a good position  amongst the lane's and hedges, from which they began to ware-down the Royalist foot.
The Royalist quickly grasped that they could not win the firefight, so advanced as rapidly as they could to close with the enemy. This was costly as the Dragoon's fire was able to force-back two units of enemy foot.
﻿  However one regiment was able to make contact and quickly routed the pesky Dragoons before securing their ground.
Meanwhile both sides were manoeuvring their Horse and Foot to support the assault on Round Hill. The evening ended with  honours pretty even in the northern section of the battlefield.

So finally we look to the centre of the field and the battle for Round Hill. This was stoutly defended by a brigade of Foot and three artillery batteries. Some excellent shooting from the Parliamentary foot meant that Round Hill was not seriously threatened in this first part of the game.  Indeed the defenders shooting was so effective that the Royalists lost an entire brigade with only limited damage done in return.
So at the half-way point things were fairly even overall. Rupert's Horse was making good progress in the south, but the centre was firmly going Essex's way. Honours were pretty even in the fields to the north. Tune in next week for the conclusion.