The Defile - After Action Report

Having completed our various Waterloo scenarios we played a game of Muskets and Marshalls  from C S Grants much-loved Scenarios for Wargamers. I choose one I'd not done before - The Defile / 300. 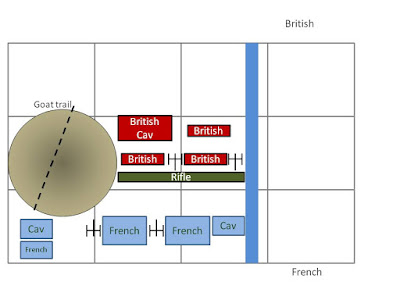 The scenario features a French attacking force of 6*Battalions and 3*Cavalry regiments against a British force about half the strength. As a twist not at all stolen from history there is a goat-track through the otherwise in accessible mountains that enable the attackers to outflank the defile.

As this was a scratch-battle I neglected to take any pictures so instead it will be dispatches from the front...

The battle opened with a French attack in columns across the line, supported on the right by a Dragoon regiment. The British artillery caused some damage to the Swiss battalions forming the French left but the line advanced boldly.

The French then launched an all-out attack on the British line. For once the British shooting was poor and most of the attackers were able to smash into the defending line. Heavily outnumbered the British line resisted for a couple of moves but then buckled. 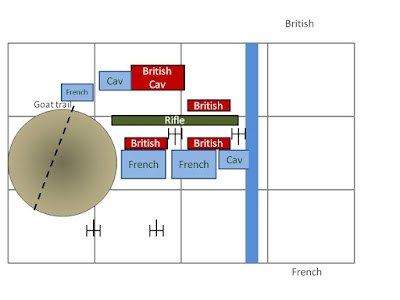 Around this time the outflanking force arrived. In the end it had little effect as the routing of the main line of resistance effectively ended the battle.

The key moment was the decision of the British to stay in line and try to shoot away the attacking French infantry / cavalry on the right. Poor shooting meant we could nt tell if this was viable. An alternative might have been to form square and so dissuade the Dragoons from charging, then rely on the guns to keep the French columns at bay.

On the rules we had an unusual position of a combined attack and so pondered what combat outcome modifiers to apply. In the end we decided not to apply both Infantry in column vs line and cavalry vs line as they felt like they were rewarding the same thing.
Posted by Wargamer Stu at 11:57