Following last week's victory in Dumfries, Cromwell choose to press his advantage against the Royalist and continue up the west coast into their territory around Ayrshire.

For this game there were low hills on one end of the table, a small village in the Scottish centre, and a fortified farm within reach of the English. With the hills an obvious feature both sides deployed all their horse on that flank (the English right) and refused the other (the English left). Once again the Scottish had their aggressive Highlanders to the fore, with the Irish and Royalist foot in support.


The first move saw both sides quickly grabbing the built-up areas within their half. The Scottish pushing several units of Highlanders into the village, whilst the English Dragoons and Storming Party seized the fortified farm.

With the English well ensconced in the farm the Scottish made the first of several attempts to capture this strongpoint and turn the English left. The first assault by a Highland regiment was easily beaten  back by the English Storming Party.

On the English right the MOA cavalry battles commenced as both sides pushed forwards. The luck was with Cromwell though as he gained the initiative and most of the Scottish Horse failed to counter-charge, placing them at a disadvantage in the ensuing melee.

Caught at the halt by the Veteran English troopers most of the Scottish Horse were quickly routed from the table with the Ironsides in hot pursuit. One unit of lancers faired better though, catching some English off guard and pushing them back.

Seeing that the cavalry melee was not favouring the Scottish they launched an immediate infantry attack across the line in the hopes of breaking through the English. In the centre the Highlanders met with some success, mostly winning their tussles with the NMA foot and pushing them back in disorder. On the English left the Storming Party held-firm in the walled gardens. The Drogoons came under pressure but were relived by some English foot who pushed the attacking Highlanders back.

Now came the crucial phase of the game. As infantry casualties grew for the Scottish, Cromwell was able to regain control of his Horse. They mopped-up the remaining Scottish lancers and forced some Irish foot intro pike stand right in front of Cromwell's commanded shot.

Despite the good progress made by the Highlanders the loss of all the Scottish Horse and several infantry pushed them to breaking, as the English Dragoons managed to steal an unguarded victory objective. So a 12-4 win for the English.


So an interesting game, where the terrain led both sides to load the same wing with all their Horse. The English plan was to win the cavalry battle and then threaten the flanks. The Scottish hoped to force a stall-mate on the flank while their Highlanders won the day.

This nearly worked and they proved effective against the Veteran English foot. Two factors worked against them though - firstly their Horses failure to charge led to a more rapid collapse then they hoped and secondly the stubborn resistance in the farm  stopped them turning the English left. 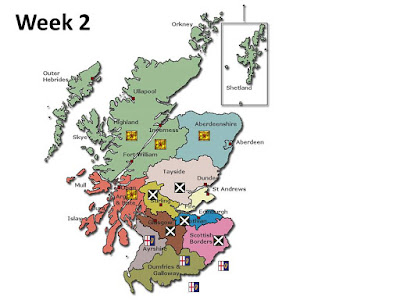