Forward, victory is near!

In this late war campaign, both the Russians and the Axis are seeking to seize a foothold across an important river and then breakout to achieve a strategically important victory.
Turn Sequence


Both the sides begin the campaign in their respective deployment zones. Each turn you may launch a single assault move, counting as the attacker. If both sides assault into adjacent, or the same vacant square,  then an encounter is fought.

This means that each turn will either consist of 1 encounter or 2 attack vs defence games. 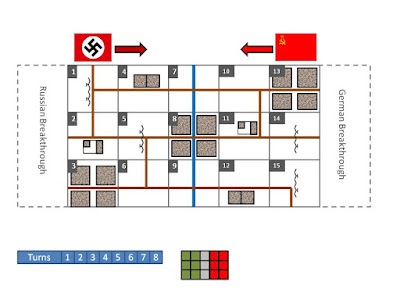 Both sides receive core units (infantry platoons) and then reinforcements depending on the mission involved. You may vary the amount you allocate to your attacking and defensive games within certain bounds.


Terrain and jump-off-points are predetermined for each battle. To allow battles to begin promptly we are not using the Patrol Phase rules for this campaign.


The attacker must win in order to capture or remain in the square, otherwise the assault has failed. Should neither side win an encounter game then the battle is drawn and both fail to capture the square.


Casualties are NOT carried forward from game to game - this is an important sector so the whole battalion is available to support you.

For this campaign we will be using our Fire team rules here. http://cirencester-wargames.blogspot.co.uk/p/world-war-ii.html
Posted by Wargamer Stu at 11:59