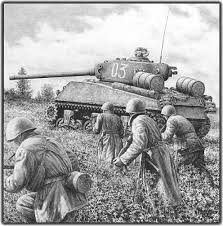 Once again Scipio was away on his travels so we returned to testing the new set of WWII rules that I've been developing. The key changes from the last game were:
1. To make shooting about 50% more deadly and base all the probabilities on the notion that everyone would be in soft cover as their standard deployment.
2. To move to a system based on Fire Teams shooting e.g. an LMG plus supporting crew, a group of riflemen, or a single heavy weapon. 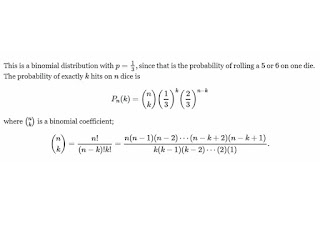 3. To adopt a D10 based system to make the calculations of % hit/kill chances much easier for me. Turns out the problem of "what's the probability of getting X hits with Y dice where hits are on 5's and 6's" is not as trivial as you might think. See the maths below...


This weeks game pitted two veteran Fallschirmjäger squads with support from a Hanomag, Panzer IV, and mortar against  4 regular Russian squads plus a Maxim, 2*50mm AT guns and 2 medium mortars.  The Germans were on the attack aiming to capture 2 of the Russian Jump-off Points to claim a win.

The Russians had a main-line-of-resistance based a road and an abandoned church, with a crater- marked field to the front of their position. The Germans entered along a road bordered by fields and small stands of trees.

The early moves saw the German armour cautiously enter the table while one FSJ squad and the mortar spotter moved into cover on the edge of the table. In response the Russians deployed most of their infantry along the MLR along with both AT guns.

As soon as the Panzer entered the table the AT guns opened-up and in a lucky shot were able to immobilise the tank immediately. There is only a 5% of this occurring but that's war and the Panzer IV has been unlucky in previous games. With this setback the Germans deployed the rest of their infantry and sought to suppress the Russian AT guns with a combination of mortar and LMG fire.


On the Russian right the infantry moved forward through a network of fields  but became bogged down as they ran into sustained LMG fire from two German fire teams deployed at the edge of the table. They responded with mortar fire that also pinned the Germans, although with limited casualties. 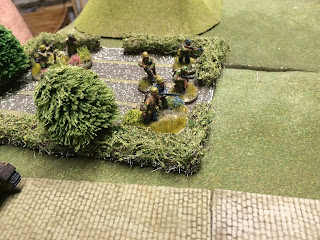 On the German right they decide to advance one fire team while the other provided cover fire. They also opened -up with the mortar and Hanomag's LMG against the Russian AT guns. Several rounds of fire saw the AT guns dispatched but the advancing infantry team became isolated and was eliminated by combined infantry and Maxim fire.


A much more successful game than the first trail with the new infantry firing system seeming much better. The greater deadliness of fire gave a better game and the opportunity for a decisive outcome. Vehicle shooting needs a little work for smaller vehicles and soft-skins but mostly in the area of assessing damage. Artillery needs a little more testing to ensure its impact is right for troops caught in the open - this might be achieved by trying to integrate it into the fire team shooting system in some form.