Nelly The Elephant - a Mumakil for Kings of War

I've recently begun work of putting together an army for Kings of War and have settled on a fantasy Arabian army as this can be dual use for Armati as opponents for the Crusaders. So this caused me to go back and complete my Harad Mumakil from Games Workshop. I got this for Christmas several years ago but never got further than undercoating it. Now complete it should be a fine centre-piece for the army. 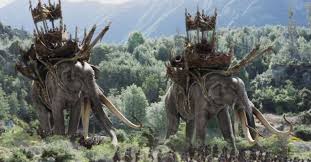 Despite the fact that KOW is looking to accommodate GW models and armies there is nt anything that directly maps onto the Mumakil. So a few options present themselves using Large Cavalry Hordes.

Email ThisBlogThis!Share to TwitterShare to FacebookShare to Pinterest
Labels: Arab, Kings of War