Kings of War - a quick review 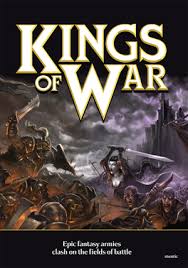 This weekend I travelled to my brother's Wargames room for a game of Kings of War - a set of fantasy mass-battle rules from Manic Games. The core rules and army lists are available free to download from their website at http://www.manticgames.com/free-rules.html. They are clearly aimed at those with Games Workshop armies as the troop-types and unit sizes map across very simply.


The rules are aimed at being simple and lightweight to enable a quick game and certainly a decent sized game is possible in about 2 hours. The rules have something in common with the original Warhammer (troop factors) and Armati (flanks matter).

Units have a series of factors denoting their attack ability (number to beat on D6), defence (number of beat to kill), number of attacks and morale. Crucially there is no figure removal so a units resilience and attacks are based on its size, with units being; Troops (10 figs), Regiments (20 figs), or Hordes (40 figs). There are also heroes, monsters, and war-machines all based singly.

When testing morale you roll 2D6 and add the number of "hits" previously taken. Exceeding a certain score means wavering or routing. So for example with a small Troop being perhaps 10/15 you can see that with 4 casualties you are very likely to waiver (10+) or route (15+). With a Horde at perhaps 20/25, then 4 casualties gives no risk at all of bad morale. So larger units are more resilient but take up more space and are more costly if elite troops.

The core of the rules though is movement and especially charging. Most units are allowed to wheel then move but must then go straight ahead. More complex manoeuvres can take a whole turn. So the Armati influence comes from the relative immobility of many units other than moving ahead. Charges are always straight ahead and by the shortest route so bad planning can see you charging through rough terrain and being Hindered in the combat. Flank attacks are deadly doing double damage and with hard-hitting units possibly having 25 attacks they are often decisive.

Finally the turn sequence needs some careful thinking - each player moves, shoots, fights, and then rallies in turn. So oddly you will charged and attacked without fighting back. If you are not broken the enemy falls back and you charge them in the next turn. So initiative can be key, as is planning your moves and charges. Fortunately pre-measurement is allowed although in competitive play markers are usually banned and a chess clock used to limit time otherwise players can try to simulate the whole battle!

Magic and heroic leaders are modelled but don't seem to have a major effect. Magic mostly boosts units combat abilities and does some limited ranged attacks. Heroes are not all conquering and are best used to support key units or boost morale.


Our game featured Ratkin (Skaven in GW-speak) verses Kin (night-elves) aiming to capture 3 treasure tokens from the centre of the table. The Kin were faster with more firepower but the Ratkins had the larger army. For a fuller description of the battle see http://fishpondswargames.blogspot.co.uk/2017/05/first-blood-rats-vs-kin.html

The Ratkin deployed fairly evenly across the table seeking to contest all three counters. The Kin focused on only two, having a smaller force to begin with.


The Ratkin pushed forward across the line seizing two of the three objectives very early by making double moves. The third (on the Ratkin's right) was contested by the Kin's hero and a unit of flying gargoyles.


The early advantage did nt last though. The Kin have lots of firepower and some hard hitting units. As they had the imitative for the whole game well-timed charges and shooting are powerful as you can be badly damaged without being able to respond. This fate befell the Ratkin Horde in the centre as they were assaulted by two powerful Kin units.


Over on the Ratkin's right they held their own but were eventually flanked by troops freed from the  Kin's centre and so succumbed.  On the left they captured a largely uncontested objective.

The game ended 2-1 to the Kin in objectives, but the Ratkin's having suffered much heavier damage. In hindsight the Ratkin's were greedy in trying to contest all three objectives but with a larger force its tempting to try this. It was also a compromise list based on the models available - I suspect the way to play the Ratkins is to have more of the cheap but large Horde units, and rather less of the elite units which are not as tough as the Kin. The Kin look good though with a decent number of tough / manoeuvrable units and solid fire power.


Angles and moves do need careful planning, as with poor initiative you could be caught out badly by being assaulted without the ability to fight back. This does however mean sacrificial units could be used to good effect to lure enemies into a trap.

The game was certainly quick, bloody, and simple so meeting our needs of a 2-3 hour game we can play on an occasional basis without needing to learn complex rules. With angles and distances so critical for charging I can see competitive play being contentious affairs with lost of laser-based aids being popular. Not an issue for friendly games though.

Email ThisBlogThis!Share to TwitterShare to FacebookShare to Pinterest
Labels: Fantasy