In battle 4 the French were victorious against the Prussians at the crossroads and so pursued them back to a defence position anchored on two fortified farms. This being 1815 and somewhat inspired by Waterloo they are substantial affairs modelled after Le Haye Sainte and Papelotte farms.

Each farm counted as 2 BU zones with the winner being the one who held the most at the end of the game.

The Prussians naturally focused their defensive position on the two farms that were deployed on either side of their main lines, occupying each with 2 battalions of infantry. The allied right was refused but their left was loaded with 2 brigades of cavalry. More infantry and the artillery covered the centre between the farms. Their plan was to attack on their left with the cavalry whilst holding-on grimly in the centre.


The French plan was more innovative, having learnt from previous games that BUAs are very difficult to capture quickly, even when you have better and more numerous troops.  Against the farm on the Allied right they massed 6 battalions of A-class troops with the all the heavy cavalry covering their exposed flank. Against the farm on the Allied left they massed most of the guns with support from infantry and the light cavalry.

The plan was bombard one farm until it caught fire whilst capturing the other - so the French were going for a 2-0 win on BUAs as they felt they could not capture both farms.


The game began with a rapid assault by the Swiss, Irish, and Young Guard units against the farm on the Allied right. Such combats are a hard slog for the attacker by they were wearing-down the Prussian defenders and hoped to break through in 3 or 4 turns.


In the centre both armies advanced hoping to dominate the ground between the two farm complex's. Both sides had deployed some cavalry in the centre so these clashed between the waiting infantry lines, with honours largely even. On the Allied left their combined-arms counter-attack began to rumble forwards in the hopes of disrupting the French advance.
This of course left the French cavalry on the Allied right totally unopposed for they pushed forward with horse artillery in support and forced the Prussian reserve units guarding that flank into square. Classic Napoleonic's - cavalry, squares, and canister!  ﻿

On the Allied left the heavy French bombardment forced one Dutch battalion back from the farm and started several fires that would eventually gut that side to the farm.

Meanwhile the Allies pressed forward in both the centre and on their left as they had a numerical advantage with the main French forces deployed over on the Allied right. This attack was a strong-one and stood a real chance of pushing the French back before they had managed to capture the farm on the Allied left.


The crucial part of the battle as now at hand. The French finally managed to force the Prussian defenders from the farm on the Allied right and with the other farm half ablaze they were leading 2-1 on BUAs held.
The attack by the Allied ﻿cavalry met with initial success bursting through the French front lines but was halted in its tracks by a unit of Dragoons deployed from the centre. The Prussian Cuirassiers gallantly charged a French square but were repulsed with steady fire from the unflappable Leger.

So with night falling the Allies still posed a real threat but the French were firmly in control of an entire farm complex so claimed the battle 2-1. A close-run game and some interesting tactics from both sides.


So after 6 battles the campaign has turned in favour of the French with them opening a 5-3 lead over the Allies and poised to attack the final square. 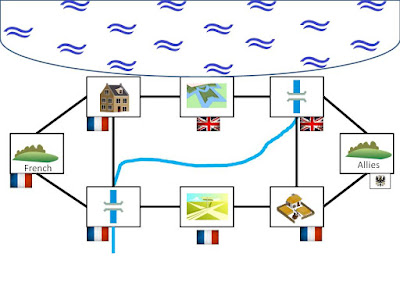 At this point we are pausing the campaign as the British commander has been posted to India as punishment for his misfortunes on the battlefield. Well actually its a holiday in Mauritius but you get the idea. So the next few weeks will be dedicated to testing some ECW rules.