The fourth battle of the campaign saw the French renewing their assault against the crossroads being contested by the Prussians. Both sides aim was simple - capture and hold this vital junction to secure their supply lines for future operations.

The French forces were at their strongest here deploying both the Guards and their additional cavalry brigade. The Prussians were supported by a British cavalry brigade.

The outnumbered Prussians adopted a slightly half-and-half deployment somewhat between attack and defence. About two thirds of the infantry were in the centre ready to attack the crossroads and about one third in line defending the left flank. The cavalry was all massed on the right.

The French plan was more aggressive, with a large mass of infantry (including all the A class troops) forming the centre. A single brigade and most of the guns guarded the right flank and cavalry brigade the left. The plan was to buy time on the flanks and assault in the centre  - a classic plan from Marshall L'Boss.

The action began with both sides pushing forward in the centre to establish control of the crossroads and the nearby farm house. The Prussians demonstrated on the left flank against the weaker French but surprisingly did not attack the outnumbered French cavalry.


The initial manoeuvring was fairly even until the French unleashed a unit of Dragoons in the centre of their lines against the Prussians advancing on the crossroads. Although the charge was halted by heavy fire it did buy time for the French to steal a march and advance over the crossroads first.   ﻿
﻿
﻿﻿﻿﻿﻿﻿


Seeing they were outnumbered in the centre the Allies finally advanced with their cavalry in an attempt to force an advantage on their right flank. They outnumbered the French horse 5-3 on this flank.


In the centre the French assault on the Prussian lines began with A class Swiss and Guard units leading the way.  Outnumbered 2-1 the weaker Prussians were gradually pushed-back away from the crossroads.

On the Prussian left they found themselves under assault from French infantry and cavalry, with one line battalion swept-away by the gallant Chasseurs and a second routed by combined musket / artillery fire.

The last hope for the Allies was their cavalry on their right where they had a 5-3 advantage. This rapidly became 4-3 as the Prussian hussars were halted by French artillery fire and then 3-3 when a unit of British hussars proved reluctant to charge.


With numbers now even, the heavier French cavalry made fairly short work of the Allies and the last hope was snuffed-out. ﻿
So the battle ended with the French in firm control of the crossroads and both Allied flanks in trouble. A good win for the French and their first on the attack.

Two French victories had resorted the balance in the campaign with both sides once again holding equal territory. 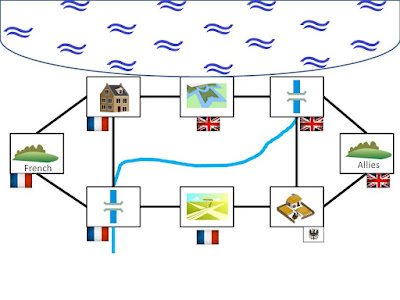