In the second battle of the campaign both sides were fighting for control of a strategically vital crossroads. In this battle the French fielded all their reinforcements so a Guards infantry brigade and cavalry brigade in addition to their infantry Division. The Prussians were supported by a British cavalry brigade.

The battlefield was fairly open with a few scattered hills and woods but was dominated by the crossroads and small Inn with a hedged enclosure. Both sides adopted roughly the same plan by massing their cavalry on their own left. The French position was slightly stronger as their right flank was covered by the Guard.

The Prussians stole an early march by doubling in the first move and closing-in on both the Inn and the crossroads. In an interesting move two of the British cavalry regiments turn-in towards the centre of the field and moved swiftly towards the French. This had the effect of pinning the French infantry and delaying their advance.

After several turns of artillery fire the French were able to force the British cavalry back and so begin a cautious advance towards the crossroads.

On the French left their cavalry brigades began a steady advance with support from a battery of horse artillery. The Dutch troops guarding that flank quickly formed three squares to guard the advancing Prussians flank. In a classic Napoleonic manoeuvre the French artillery shook a square , before a Hussar regiment charged home routing them. They in-turn were forced back by British Hussars.       ﻿
﻿
Back in the centre the French launched an unsuccessful assault on the Inn, but a second attack supported by the Swiss was eventually able to secure the Inn and surrounding enclosure, forcing back the defending Prussians.


This signalled a more generally advance by the French as the light began to fail and night approached. In the centre they pushed forward towards the crossroads and began a firefight with the Prussian infantry stationed there. On the right the Guard advanced and was able to force back the Prussian cavalry and British horse artillery, whilst on the left the French cavalry assaulted the Dutch.

This largely met with success - the Guards seeing off most of the Prussian cavalry and the Dutch mostly scattered. In the centre though the Prussians clung-on and the crossroads remained contested.


﻿ In the end an interesting game to fight with things swinging backwards and forwards. The Prussians started much the better with French attack somewhat stalled by the presence of the British cavalry in the centre. Things then turned towards the French as their artillery saw-off the enemy cavalry and their advance began. The Prussians staged a late rally with some spirited counter-attacks, before the French secured control and dominated both flanks. In the end though the French ran out of time and so a draw was declared. 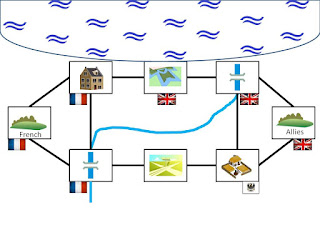