This scenario features both sides attempting to raid a village and collect taxes hidden under treasure markers scattered about the field. As the armies are 30points we expanded the markers and had 1*3points, 3*2points, 2*1point, and 2*0points.

The game opened with both sides rushing forward, well more lumbering in the case of the Germans.
The early phases favoured the Saracens, with their greater mobility, as they secured 4 points worth of treasure.


The key battle was on the south side of the village where both sides struggled over 3 objectives in the fields. There was punch and counter punch but the Saracens came out ahead securing 2 points to 1.

As the Saracens were ahead on treasure points they withdrew their cavalry, effectively winning the game at that point. However the Saracens pressed forward hoping to catch the Teutonic's slower moving troops. 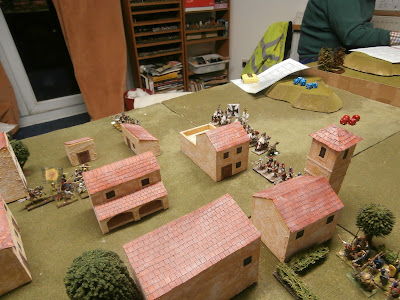 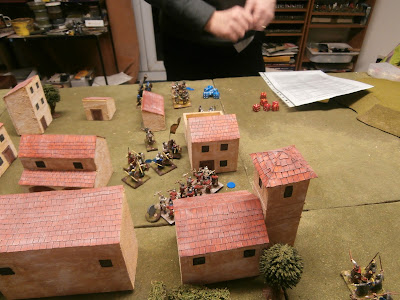 After a successful rear-guard action by their infantry the Germans were able to secure their treasure. The result was a Saracen victory by 2 points.


This scenario is another based on C S Grants Scenarios for Wargames book. The English column is marching down a road, heading for a bridge and safety, when it is ambushed by a Saracen force concealed in four hiding places. 1 point is awarded for each units escaping (1/2 if half strength) or 1 point to the Saracens for each destroyed / failing to escape.
﻿﻿

The Saracens sprung their ambush as soon as the English were about half way down the table, with a small blocking force at the bridge and most of the troops attacking the middle of the column. The English followed classic doctrine and advanced into the thickest of the ambushers to clear the kill zone.


The Saracens caused a steady stream of casualties to the English, who made no real attempt to make for the bridge, but instead focused on killed the enemy. The English foot men-at-arms proved especially resilient and ground-down the Saracens. With the enemy cleared the English advanced on the bridge itself  and the Arabs lacking any missile troops were forced to withdraw.
In the end the result was close with the English winning by 1 point. ﻿
Posted by Wargamer Stu at 01:08