This week I was absent so Roy kindly hosted a Flames of War clash between early war French and Germans. 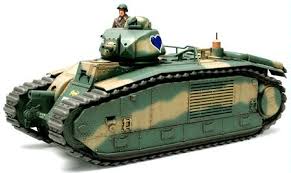 Both sides had to take the crossroads  and hold one objective near their baseline, 50 points for each. The Germans , from Rommel's 7th Panzer ( Neil and Mike ) set up with their pioneers supported by Stugs on the left looking to seize the ruined church by the crossroads. Down the road and dominating the crossroads they placed their attached 88. On their right they placed their tank force, Mark IIs, IIIs and IVs  and Czech built 38ts , looking to destroy the French left and swing round on to the objective. The Priority Stuka attack would be used to remove the defensive screen if French SOMUAs on the ridge facing the German tanks.
﻿﻿


The French , Richard and John planned to rush their lorry mounted infantry to the village and occupy it, whilst the Chars B  crawled on to the crossroads  Meanwhile the two French artillery batteries would concentrate on hitting the Germans as they moved forward. The Germans took first move and came forward, Stukas arrived and a SOMUA brewed. ineffective firing started from the 38ts against the R35 platoon on the left, ineffective because moving reduces rate f fire to 1 and shooting over 16 inches from the target takes one point extra to hit and adds one to the enemy's armour.
Then the French moved, rushing a platoon of Panhards

This continued for several moves, a mass of German pioneers headed for the church, French artillery pinned them and they could not unpin and advance for several moves, the German  tank force waited too long to move forward, destroying the Renault platoon whilst the Luftwaffe dealt with the Somuas.  French artillery got lucky and destroyed the 88 , freeing the crossroads which the Chars B eventually took.  Unfortunately the  dilatory nature of the German tank attack  which waited for the Stukas to clear a path meant that losses on their immobile tanks mounted and platoons started to pull out of the fight.  In the end the Germans conceded as , though they could challenge for the crossroads the units concerned were too vulnerable to remain in position .  So a narrow victory for les poilus.
Posted by Wargamer Stu at 23:32

Email ThisBlogThis!Share to TwitterShare to FacebookShare to Pinterest
Labels: Flames of War, WWII