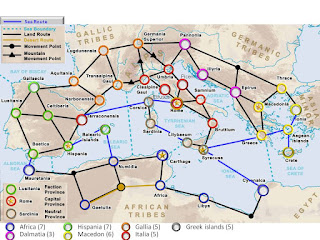 The fourth week of the campaign sees us return to Italy where Hannibal is once again in the offensive attempting to move from Umbria to Piceni as he seeks to threaten Rome itself. This week we are trialling a new reinforcement system where all reinforcement cards are available to the commanders rather than just those for conquered territories. The intent was to provide a wider range of troops to the Romans to spice-up the games. This was partly successful with the Roman forces featuring Numidian light horse and the Carthaginians some elephants.


On this occasion the Roman's adopted what appeared to be a fairly defensive formation on the presumption that Hannibal would again attempt a double envelopment. The Roman's left was guarded by heavy infantry and was angled back to increase the time taken to envelope it. The Roman's right was much stronger containing all the cavalry and the Triarii in the hopes of entangling the Punic horse long enough to create a flank attack with the heavy infantry.

The compromise in the position though was that to create enough frontage for the overlap the Romans had deployed several units in width not depth, risking them being swept away if they were fighting the Celts.

Although Hannibal enjoyed a cavalry superiority it did create a dilemma for him. In order to have flexibility with his elephants and African Veterans he would need to create heavy divisions containing two units of heavy cavalry. These are unwieldy beasts making it hard to outflank an opponent who is not foolish enough to advance and almost impossible with two such divisions on the same flank.

So the cavalry was divided equally between the flanks with the Veterans deployed close-in on the right side to hopefully do the real damage.


On Hannibal's left be battle began with both sides advancing towards the centre. The Romans were seeking to avoid the elephants with their Italian horse and destroy them with them light troops. Some careful manoeuvring allowed the Italians to engage the Celtic cavalry opposite them while the lights delayed the elephants progress. Hannibal deployed a cloud of skirmishers to weaken the Triarii who moved to support the Italian horse.


Believing that the Triarii had moved too far from the flank of their main line Hannibal pushed forward in the centre in the hopes by-passing them to launch an assault on the main line while his African Veterans sought to turn the Roman left. This saw an earlier than usual clash of the heavy infantry in the centre. With the Romans deployed well-back and slightly angled it did mean though that the African Veterans took an additional move to come to grips with the enemy.  It was a risk though as the wider Roman line left a unit of Hastati in flanking position on Hannibal's left.  ﻿


Back on the Roman right it was a mixed time for Punic's. They managed to catch a unit of Italian horse with their elephants but were only 2 moves from a deadly flank attack on their own left. Things looked grim for Hannibal.


At this crucial juncture the Veterans and Celt-Iberians crashed into the Roam left flank with deadly effect, sweeping away several Roman units deployed wide and the Celts especially performing above expectations.

As the Roman's lined up their flank attack, Hannibal won the imitative and was able to kill enough of the Romans to win the game before the attack could be launched, scoring a 6-4 victory.

So the heroes of the day for the Punic's were certainly the Celt-Iberians who broke through the Roman line just in the nick of time.


A close game and one that only swung to Hannibal in the very last move. In truth both players made some errors. Hannibal wasted half his cavalry as it became stuck wide on the Roman's  refused left and took no part in the game. The Roman's could perhaps of used the Triarii to assault the Punic's flank instead of turning outwards to support their cavalry.