After about 3 years of patient collecting and painting I've finally amassed enough troops to stage the Punic Wars in 28mm. Its always been a favourite period of mine, and lets be honest who does nt fancy themselves as a Hannibal. I've played 15mm using both WRG 6th Edition and DBM , but its taken a while to getting around to replacing them with 28mm.

The Roman's are arrayed here in a characteristic battle formation with supporting lines. From the rear we have Triarii supported by Penal Legions, Hastati / Principes, Latin allies, and finally Velites at the front. Most of the figures are Victrix 28mm plastics.

Looking in close-up we can see the Velites leading the way with waves of heavy infantry in support.
To the rear as always are the doughty Triarii acting as the final reserve - rem ad Triarios redisse, or "it has come to the triarii" as they say. 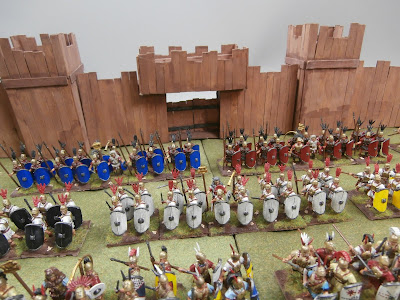 The Carthaginian's are a real mixed-bag of mercenaries and allied African troops, so I've tried to reflect that in the army. They are set out here with Punic troops in the rear, Spanish / Celts in the first line and clouds of Libyan / Numidian skirmishers to the fore. The figures are a real mixture; Victrix, Warlord Games, Crusader Miniatures, Wargames Factory (nolonger available), and 1st Corps. The elephants are party scratch-built with Wargames factory Greeks as crew.

﻿
﻿
﻿
﻿
﻿
The army is deployed with the elephants to the left and the cavalry to the right. As befits a Carthaginian army there is a significant contingent of Numidian cavalry.

Hannibal used large numbers of Spanish and Celtic troops to add bulk to his army, so I've done the same.

Finally the elite of the army are Hannibal's African veterans. Here I've depicted them in looted Roman equipment.

Having tried several sets of rules without much luck we've heeded Lewisgunner's siren call and decided to give Armati II a whirl. The rules appear simple but have lots of subtle features so we're going to d a warm-up campaign first and refight part of the Dacian Wars. So watch this space for the eventual Punic campaign.